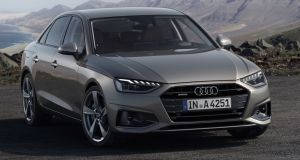 The new Audi A4 has been restyled, equipped with new engines and given a buffed-up interior

You wait ages, and then three come along at once. No, not buses – sports saloons. With BMW having brought out an all-new 3 Series, its rivals had to update to keep pace. We’ve already seen Mercedes’ revised C-Class and the face-lifted Jaguar XE, but now here’s the third and arguably most important one for the Irish market – the Audi A4.

The current A4 is, by a margin of a single car, the best-selling sports saloon in the country right now, ahead (albeit by the narrowest lead possible) of the Mercedes-Benz C-Class, and well ahead of the BMW 3 Series (albeit that’s still gearing up from its recent relaunch). To keep the A4 fresh, and try to stretch that fractional lead, Audi has restyled the car, added some new engines, and buffed up the interior a little.

At the front, there’s a new, more aggressively angled grille, and new headlights that gives it a pointier look. Those new lights are now LED units as standard across the range, and there are 12 new paint options, including a glowering “Terra Grey”.

Inside, the cabin has been mildly overhauled, with an updated 10-inch MMI touchscreen infotainment system and “Virtual Cockpit” digital instruments with a heads-up display, plus some tweaks to the centre console and the trims and details.

That MMI system now comes with “natural speech” voice recognition, connections to online services (something that’s been standard in most Audi models for some time now) and car-to-X communication, which in some markets allow it to automatically send and receive information to and from traffic management and emergency services. It’s also capable of using Audi’s green light prediction system, which can take signals from traffic lights and give you a speed at which to drive to either keep flowing with greens, or to minimise your time lost at reds.

You can also now use an Android smartphone as your door and ignition key, and as many as 134 people can share your car using the myAudi app.

Under the bonnet, there have been some rather more significant changes. Audi will offer six turbocharged engines, both petrol and diesel, with power outputs ranging from 150hp to 347hp, and from four to six-cylinders. There’s also a new 12-volt mild hybrid system which will be available on three of the engines – the 150hp, 200hp, and 241hp 2.0-litre TFSI petrol units. Audi says that the mild hybrid setup increases the car’s use of stop-start in traffic, and can reduce overall fuel consumption by 0.3-litres per 100km (just under 1mpg).

Significantly, and in spite of the apparent desertion of diesel by European buyers, Audi is doubling-down on black pump power, offering a high-performance new S4 TDI model.

That gets a 347hp 3.0-litre V6 diesel engine with 700Nm of torque. Some of that grunt comes from a new electric turbocharger, which is driven from a 48-volt mild hybrid system which not only adds power, but which, Audi claims, can cut fuel consumption by 0.4l/100km. 0-100km/h is achieved in just 4.8secs, while emissions and fuel economy are rated at 165g/km and 6.3l/100km.

Quattro four-wheel drive is, of course, standard. There is a 3.0-litre V6 petrol S4 as well, but for the moment Audi says that it will offer this model “outside of Europe” only.

The new A4 will be available to order later this month, and will start coming into Irish dealerships in the autumn.