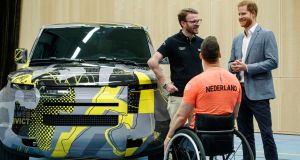 Land Rover is, finally, on the cusp of revealing its replacement for the original Defender, but it’s trying to distract us from this all-important new model by getting Prince Harry to stand in front of it. Doubtless, the appearance of both Harry and the Defender are a useful distraction from further rumours that a merger or buy-out of Jaguar Land Rover by PSA Peugeot Citroen, which are swirling once again this week.

At an event publicising the 2019 Invictus Games, of which the new father and Duke Of Sussex is a patron and Land Rover a sponsor, the new Defender made another of its recent appearances in increasingly light disguise. These official ‘spy’ photographs are the clearest images we’ve yet seen.

It’s a hugely important car for Land Rover. Not only will it have to sell well enough to turn a profit (not necessarily a given - much loved it may have been but the old Defender rarely managed to sell more than 20,000 units a year) it will have to reinvent one of the few instantly recognisable global motoring icons. Basically, you’ve got the original Series Land Rover and Defender, the Mini, the Porsche 911, the Ford Model T, and the Ferrari 308. Everything else is just variations…

From these photos we can see that the new Defender inherits the upright, blocky styling of the original. While the disguise is becoming progressively lighter, there’s still a lot we can’t quite see.

The huge clamshell bonnet is there, right enough (with surprisingly strong overtones of the old Land Rover Discovery 3 and just a hint of the current Rolls-Royce Phantom) but there are still some false panels under the camouflage wrap, so many details are still hidden from us. The door-mounted spare wheel is a nice touch, though.

As well as this long-wheelbase ‘110’ model, there will be a short-wheelbase three door ‘90’ version, and both two-door and crew-cab pickups. The pickup could be the Defender’s best chance for serious sales - the market for such vehicles is booming worldwide, but it will have to elbow aside the likes of the VW Amarok, Ford Ranger, and Toyota HiLux to carve out a market for itself.

Given that these are rugged, hard-working vehicles, Land Rover is seemingly not taking any chances when it comes to reliability, often a bugbear of the brand. Apparently, the new Defender has been benchmarked against the Toyota Land Cruiser for reliability (the Land Cruiser is often used as a synonym for reliability, so that’s a high bar) and the car has completed more than 1.2-million kilometres of testing around the world.

Nick Rogers, executive director product engineering, Jaguar Land Rover, said: “In addition to the extensive simulation and rig testing, we’ve driven new Defender 1.2 million kilometres across all terrains and in extreme climates to ensure that it is the toughest and most capable Land Rover ever made. The incredible opportunity to put it to the test in the field, supporting operations at the Borana Conservancy in Kenya, with Tusk, will allow our engineers to verify that we are meeting this target as we enter the final phase of our development programme.”

According to Rogers: “By the time the new Defender makes its public debut later this year, it will have passed more than 45,000 individual tests in some of the most extreme environments on earth. Land Rover engineers have taken the test fleet to the 50-degree heat of the desert, the sub 40-degree cold of the Arctic, as well as up to 10,000ft altitude of the Rocky Mountains in Colorado to ensure the new Defender will take everyday life in its stride, for even its most adventurous customers.”

All that’s well and good of course, but the new Defender will also have to appeal to family buyers and those who rarely, if ever, venture off-road if it’s going to win sufficient customers. To that end, Land Rover has also been testing it in an environment no factory-built Defender has ever dared tackle before - the infamous Nurburgring race circuit.

The new Defender will be the debut car for a new platform for Land Rover products - the MLA or Modular Longitudinal Architecture - an aluminium-intensive setup which will eventually be shared with the next generations of large Range Rover and Discovery products. Indeed, the Defender is also expected to mark the splitting of Land Rover into three distinct brands. Range Rover for luxury and sporting appeal; Discovery for family cars; Defender for working vehicles. Power will come from the existing Ingenium 2.0-litre four-cylinder petrol and diesel engines, and a plugin hybrid model, based around a three-cylinder Ingenium unit, is also on the cards.

Don’t expect it to be cheap though - even base models will probably top €50,000 in Ireland, although commercial models will likely be available for significantly less than that.

Production of the new Defender won’t begin until early next year, but it will be enormously important for a brand that’s suddenly struggling for sales and profit. After all, all of the brand image and rugged appeal of the rest of the lineup flows from the original Defender’s DNA. Get this new one wrong, and what happens to the appeal of Land Rover as a whole?

Also, shouldn’t Harry be getting home? He’s got some royal nappies to change…