Sliding sideways in a sand dune? No problem for the new Raptor

First drive: As craze for SUVs moves to pick-ups Ford taps talent of Co Down engineer 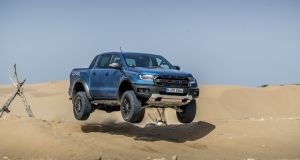 Mind the donkey on the way out and careful of the camels. With those words of warning it was time to trek the rocky roads and mountain passes of Morocco in a performance pick-up whose creation has been led by a native of Banbridge, Co Down.

On the way we encountered the sort of terrain that makes the Mourne mountain climbing trails look like paved city footpaths, and villages which seemingly have changed little since Jesus was a lad. On the outskirts, a common area is crowded with grazing donkeys, parked up by the men aimlessly strolling down the middle of the street lined with open-air barbers and cleaver-waving butchers, the skinned carcasses of lambs and goats hanging from rusty rails. There’s a nod to modern living among the biblical tableau: satellite dishes adorn every rooftop, while there’s a mound of packaged baby nappies for sale at one stall. Literally everything from human to animal – dead or alive – is coated with a crust of street dust. Nobody seems to mind.

Outside the village, on a rutted dirt track barely wide enough for a wheelbarrow, we pass a man riding side-saddle on a donkey, who greets us with a toothless smile and a big thumbs up as we crawl past. Much as our off-roader would seemingly make the man’s life a lot more manageable, it’s the donkey who looks on most enviously at the pick-up truck.

That four-legged people mover is clearly tuned to the same wavelength as many car bosses. No sooner had automotive prophets predicted that the post-SUV craze in Europe will be for pick-ups, than car companies started rolling out performance variants.

Ford has pedigree in this market courtesy of the Raptor version of its enormous F-150 pick-up in the US. Realising that’s just too much metal for most European motorists, they’ve opted to base the latest performance pick-up on a more modest pick-up in the Blue Oval’s model range – the Ranger.

A rival to the likes of the Toyota Hilux, Ford’s Ranger has proven to be a strong seller for many years, becoming the best-selling vehicle in New Zealand, for example.

The project to turn the run-of-the-mill Ranger into a red-blooded Raptor has been the work of Damien Ross, chief project engineer based in Ford’s Australia operation but originally from Co Down and with a mechanical engineering degree from Ulster University. His work has won him accolades online, with the international appetite for the car evident from online responses to sneak videos of test cars in action at Alice Springs, Australia last year.

Back on the biblical roads of Morocco, our Raptor is sailing along rocky dirt tracks, over clawing sand dunes, and down mountain passes that would trouble eager hikers. All the while it looks like it belongs on a Mad Max film set or a Paris-Dakar rally stage. In fact Ford is tapping into the history and heritage of another famous off-road race for this Raptor – the famous Baja off-road rally in Mexico. Along with the usual array of terrain modes on offer on the Raptor – normal, sport, grass/gravel/snow, mud/sand, and rock – there is a six addition for this performance pick-up, Baja. Here the stability control is turned off and the traction is tuned to let the driver have some serious off-road fun. You don’t really appreciate why so many motorsport racers love these off-road races until you’ve slid sideways in a sand dune or got airborne in a three-tonne pick-up truck.

This performance variant of the Ranger is bigger than the standard fare. With 30 per cent increased ride height it is also wider, taller and longer than the regular Ranger, with 52mm more ground clearance underneath and a better approach and departure angle, letting you mount and dismount steep ditches without dragging the nose or tail on the ground.

The secret sauce in the Raptor is its shocks. The race-bred Fox Racing shock absorbers mean the suspension has 30 per cent more travel and as a result you can hit all sorts of normally car-breaking gullies and ravines at speed and the Raptor just carries on. The body sits placidly on top, sailing swan-like along over the chaos below.

Of course there have been other changes as well. First off is a specially reinforced heavy-duty chassis that can take the hard labour, then there is a new coil spring rear suspension set-up. New 2.3mm high-strength steel bash plates line the underbelly to protect the engine bay and other parts from damage, particularly when you come down to earth with a bang. Under the bonnet, there’s a 210bhp 2-litre bi-turbo diesel engine combined with the latest 10-speed auto transmission from Ford’s performance team; it’s the same gearbox that appears in the latest GT version of the Mustang.

Keeping it in touch with terra firma is a set of specially developed BF Goodrich tyres, shod on the 17-inch wheels. A few more stats for those who are interested: it can tow 2.5 tonnes and wade in depths up to 850mm without getting your feet wet. And it features the usual array of off-road functions, including an electronic locking rear differential.

Off-road the Raptor is a blast, seemingly unflappable and incredibly comfortable over even the most ridiculously rough terrain. On the road is where you need a little more compromise, as the steering feel is clearly affected by the thick rugged rubber between car and road, while the height means you inevitably lean a little into bends. There’s also the ever-present issue with a pick-up, where the weight is at the front and there’s very little on the back unless you are carrying a load. All these contribute to the car’s handling ability.

You can see why many self-employed construction workers or farmers appreciate the pick-up mix of form and function. While the cabin is much more car-like and comfortable than many of its rivals, it’s still not as practical as an SUV when it comes to lugging luggage or groceries around – that rear loading bay has a cover but you’ll need to tie things down to stop them flying about. Where it will appeal is to someone who can use it instead of a van, or for farm work.

Ford is claiming a fuel economy figure of 8.9 litres per 100km (31.7mpg), which is pretty decent for a vehicle this size, while emissions of 233g/km are not going to make environmentalists delighted, but they are lower than the sort of older vans many potential buyers will be exchanging for the Raptor.

Starting at €65,000, it seems a little steep for a pick-up, but Ford Ireland is convinced the market is there for about 100 a year. The Raptor qualifies as an N1 commercial vehicle for tax purposes, which means a lower VRT and if you register it for your business, then commercial motor tax rates apply.

Already the buyers of Ranger pick-ups are spending on average about €10,000 dressing up their cars with kits and accessories. Pick-up owners opt for this format because of the look, and like to dress it up. The beauty of the Raptor is that you get the pack professionally done by Ford’s performance team, so you get the pedigree of the Raptor sub-brand – complete with leather-clad Recaro seats – and the added performance punch of the new engine and transmission along with those racing shocks.

So if a biblical rapture ever does arrive, at least you know the Raptor can probably cope, so long as you can keep the undead – and tired donkeys – from hitching a ride in the back.