Past and present of an iconic British car – the Mini 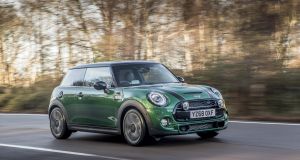 The Mini Cooper S 60 Years Edition isn’t the fastest hot hatch around but it still has the lightning steering response that you expect from a Mini, and it’s still gloriously good fun to drive

It seems, as you open the door, as if you’re about to take a step back in time. The exterior looks old, albeit well-scrubbed up. Even given the modern trappings that you can see, it does look rather classical. In fact, it’s been here since 1926.

And then you step across the threshold of Mini’s home factory, in Oxford, and you’re jolted very firmly into the 21st century. The exterior of much of the sprawling assembly plant does indeed date from 1926, when the site was shared between Morris Motors and Pressed Steel Fisher.

Back then, Morris was turning out compact little Morris 8s (remember the car James Herriot drove on telly in All Creatures Great And Small? That one…) while Pressed Steel would go on to build bodywork for none of than Rolls-Royce. All of this was eventually swallowed up by the doomed behemoth that was British Leyland (a conglomerate that celebrated, if that’s quite the right word, its 50th birthday last year) and then Austin Rover, and then Rover Group.

And then in 1994, BMW bought out Rover Group, and decided that the Cowley plant (as Mini Plant Oxford was then known) would build the company’s new saviour: the Rover 75.

Yes, well, we all know how that worked out. In 1999 BMW dropped Rover, but kept Mini. The 75 production line was ripped out and sent to Rover’s Longbridge factory in Birmingham, while production of the all-new Mini, the first properly new car in the brand’s then 40-year history, was hurriedly installed in Oxford. The Mini launched. The Mini flourished. Rover staggered on for a bit, then finally collapsed and died. History has no mercy.

Well, it seems to have some for the Mini. Taking a car that had cost, when first introduced to the Irish market in 1959, just £459 and ten shillings, and turning it into an expensive, overtly sporting, self-consciously retro small coupe (ignore the hatchback’s shape, that’s what a modern three-door Mini essentially is) was a huge risk.

But we loved it, and continue to do so. Whereas that Cowley factory once turned out a mish-mash of bodies and brands, now it just makes Minis – about 220,000 of them every year. Mercy wasn’t shown in staffing terms, though. In its sixties pomp, Cowley employed 28,000 people. Now there are 4,500 “associates” working the lines.

And not many of them in the body shop. Newly built a few years back at the cost of £750 million, this vast hall is stuffed with robotic arms, all of them twirling and twisting in a seemingly deranged game of mechanised Tetris. With a flurry of spot-weld sparks, they turn flat panels, trucked in from Mini’s metal stamping plant in Swindon, into three-dimensional car bodies. It’s not half as noisy as you think it’s going to be, but there is a distinct industrial tang of hot metal and crackling electricity in the air. A Frankenstein’s lab dedicated to precision engineering.

It takes 28 hours for stamped metal to become finished car, driven off the end of the production line for a quick spin around a truncated test track to ensure that everything’s working as it should. Then it’s on to a train, bound for a vast container ship at Southampton docks, if it’s for global export. Cars bound for the UK or Ireland go on to a truck.

Well, not this one. Fresh off the line, this is a three-door Mini Cooper S 60 Years Edition and instead of a truck, it’s been entrusted to me to bring it back to Dublin. You’ll spot the 60 Years Edition pretty easily, as it gets a unique shade of dark green paint.

Mini calls it British Racing Green IV, but while we didn’t have the heart to tell them that, technically that should be Irish Racing Green (thanks to the colours origins in the 1903 Gordon Bennett race) we sure could at least admire it. In the sparkling sunshine of an Oxford afternoon, it looks fabulous – deep but bright at the same time. It’s set off by a black roof and matching bonnet stripes, which get a 60th anniversary logo. Inside, the cabin gets lovely bucket seats, which feel more like bucket armchairs, finished in Dark Cacao (brown to you or I).

We do seem to be focusing on the paint and stickers a lot, but then that’s because there’s not a lot else to mention when it comes to this car. Considering how shockingly innovative the original Mini was in 1959 (yes, I know it was technically called the Austin Se7en or Morris Mini-Minor – Mini as a catch-all didn’t become its official name until 1962) it seems a shame that the best Mini can come up with for this major birthday is a special edition of an existing car, even if it is limited to a 500-long production run.

Which is not to be down on the car itself. A Mini Cooper S is rarely every anything less than a delight to drive, and that proves the case here. The muscular 192hp 2.0-litre turbo petrol engine sends all the appropriate farts and growls down the exhaust, and sends all the appropriate power to the front wheels, via an eight-speed automatic gearbox.

It’s not the fastest hot hatch around, and doesn’t feel as furious as the Fiesta ST, but it still has the lightning steering response that you expect from a Mini, and it’s still gloriously good fun to drive. It’s also much more comfortable and classy inside than the rival Ford, but then it should be considering the price premium.

That’s the confounding thing about the modern Mini. It stopped being a Mini years ago, at least in the sense of the original. Alec Issigonis, the iconoclastic engineer who created that first car, was interested only in making the most fuel-efficient four-seater possible; a car that could take a family of four, plus luggage, and still not exceed three-metres in length, or 10 feet in old money. He did that, but at huge cost.

The innovative transverse engine layout, with front-wheel drive, was wildly new but it meant having the engine and gearbox share an oil supply, which reduced the reliability of both. It meant an inside-out construction, with subframes and external body seams that were inevitable rust traps. It meant a body that was so unique, so unlike anything else, that it cost Morris and Austin more to make it than they could get for selling it. It was nuts.

British Leyland would later try to kill or cure the problem. The front-end was revamped into the unloved Clubman, while production was expected to end with the creation of the 1980 Mini-Metro. More crises saved the original Mini – born out of the post-Suez fuel restrictions, the oil shocks of the seventies, and the recession of the eighties, meant that saving fuel was paramount, and at that the Mini, even with its antediluvian engines, was peerless.

None of that applies to the modern car, expect perhaps the fact that here is a high-performance Cooper S that achieves a mystifyingly low Co2 emissions figure. The current Mini is big, relatively heavy, far more luxurious than Issigonis would ever have allowed, and so expensive that BMW makes a considerable profit on each one sold. This 60th model especially so – at €41,995 on the road it’s actually more expensive than the more powerful John Cooper Works model.

Yet it’s still a Mini. Bloated though the styling may have become, it still seems cute and pugnacious. Cramped though the back seats might be, they’re more useful than you’d think. And it’s always, ever, indisputably enormous fun to drive.

So the present matches the past, then. The factory may have changed out of all recognition, but a Mini’s still a Mini when you get right down to it. What of the future, though? Ah, the future’s electric…

Food and drink quiz: What will ‘service à la française’ bring you?
8