Tax-break special SUV makes a comeback on the Irish market 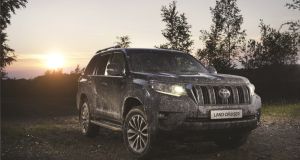 Toyota will offerthe five-seater business version at €56,907 - significantly less than the €104,630 asked for the previous passenger Land Cruiser model

In spite of being a luxurious five-seat SUV, it could be bought as a commercial vehicle - qualifying for the lowest commercial rate of Vehicle Registration Tax - because of a loophole in the car tax system that allowed it to qualify for N1 commercial vehicle status. As long as the load space (or the boot, if we’re being more honest) was totally separate from the passenger space, it slipped through the loophole.

That loophole was closed by a change to the taxation system last year, but now Toyota is bringing back the Land Cruiser Business, and it is once again an N1-qualifying vehicle when it comes to VAT.

How does that work? Thanks to Co2 emissions of 197g/km from its 2.8-litre, four-cylinder, 177hp diesel engine, the Land Cruiser Business gets hit with the 34 per cent passenger vehicle VRT bill.

Basically, Toyota Ireland has cut its cloth to suit the market, securing a significant discount from the factory on the wholesale price of the car. A spokesperson for Toyota Ireland told The Irish Times that: “The reintroduction of the model at what we still consider a competitive price is a result of negotiations with the factory, and contributions from local distribution. The fact that the VRT element has increased should not concern customers, as the VAT treatment of the Land Cruiser five seater as an N1 classified vehicle is unchanged from the Land Cruisers sold up to July last year.”

And that’s the kicker. Although the old N1 classification for VRT is dead and gone, it still works for VAT which means that businesses buying the Land Cruiser can claim back that €13,000.