Bigger than the Beetles - Volkswagen opens orders for its new ID.3 electric car

New rear wheel drive ID.3 will be available from 2020 with a choice of three battery capacities 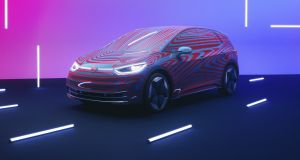 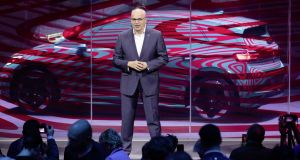 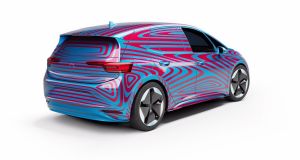 Volkswagen’s ID.3 electric car is its next big thing after the Beetle and Golf.

This claim was made by Jürgen Stackman, Volkswagen board member at the global preview of the ground breaking VW in Berlin on Wednesday. The new EV is designed for the people, he says.

In the metal it’s Golf-sized on the outside, but inside larger and closer to a Passat for space.

The rear wheel drive ID.3 will be available with a choice of three battery capacities; 45kW/h, 58kW/h and 77kW/h that can deliver a driving range of up to 330, 420 or 550 kilometres respectfully under the strict new WLTP testing.

A limited number - 30,000 - ID.3 ‘1st’ edition models equipped with the mid sized battery will go on sale initially with deliveries starting in mid-2020. German pricing for this fully loaded version of the five seat car starts from €40,000 excluding grants and incentives, there will be three grades available.

The ID.3 range will start from just under €30,000 ex grants in Germany while Irish pricing is far from finalised but we expect a circa €3,000 premium that would bring it onto the market with a price tag under the soon to be discontinued electric eGolf. A launch sweetener for German buyers of the first edition sees it give a year’s worth of free charging up to a maximum of 2,000kWh at all public charging points connected to the Volkswagen charging app We Charge. This incentive is unlikely to be offered in Ireland, but it has not been fully ruled out as public fast chargers will attract fees by then. Owners can also access the pan-European Ionity rapid charging network.

Volkswagen is pushing the ID.3’s carbon neutral production and says both battery cell production and ID. production are oriented towards this goal. The ID.3 starts production at the end of this year and will be built with power from renewable sources. Volkswagen says any unavoidable emissions in the production process will be compensated for by certified climate projects. Volkswagen is confident it will have sufficient battery supply to meet the expected high demand.

“With the start of pan-European pre-booking for the ID.3, e- mobility at Volkswagen will become concrete for our customers. From today, everyone can take part,” said Jürgen Stackmann, at an event in Berlin. “With the ID.3, we will be ushering in the third major chapter of strategic importance in the history of our brand, following the Beetle and the Golf. With the ID.3, we are making the electric car fit for mass mobility. Initially, we will electrify Europe with the ID.3 and then other regions with further electric models in the ID. family which are to follow in the near future.” These will compliment the existing VW range so we can expect future IDs inspired by Tiguan, Passat and others.

The ID.3 1st special edition will be available in four colours and three versions. All come with large wheels and comprehensive equipment that includes voice control and navigation. A large panoramic glass roof features, we presume in an effort to rival Teasel’s full glass roof in its model 3. The ID.3 gets other toys with an augmented reality head-up display being a highlight.

A fast charging function features that can deliver 260 kilometres of driving range in 30 minutes using a 100kWh DC charger. VW claims a 30 per cent saving on servicing over a conventional engine powered car. Like Tesla’s the ID.3 will be capable of upgrading itself via the Internet during its lifetime with hardware updates available at dealerships.

Volkswagen Ireland’s pre-order books are now open via a link on its website. Regular petrol and diesel car buyers have been patiently circling EV waters might now bite thanks to VW’s new direction. While the hype about the ID.3 might not be as outlandish as with Tesla’s Model 3 a couple of years ago, who would have thought people would be prepared to pay out €1,000 to get a chance to order a Volkswagen for delivery in 12 months time.

The payment holds the option of ordering later in the year after the Frankfurt motor show. This amount is refundable and/or deductible from the purchase. Its not quite the Tesla Model 3’s deposit grab but it will ensure you get a car in 2020. It will be 2021 before you will be able to walk in to a VW dealership in Ireland and buy a new ID.3 off the floor. In Germany, the binding order will become effective in April 2020. Up to that point, customers will be able to cancel their registration at any time without charge and their registration deposit will be refunded.

Pre-booking is being offered in 29 European markets. Volkswagen says the most important markets in Europe for the ID.3 will be Norway, Germany, the Netherlands, France, the UK and Austria. Volkswagen plans to sell more than 100,000 vehicles per year. Presently it has more than 20 electric models in the planning stage.

Volkswagen says today is a special day as it opens a new chapter in its history. E-mobility is now tangible for its customers as issues of range, charging times, price and looks are being addressed by its ID programme. The phrase you can’t buy an electric car is changed to ‘now you can’ well that’s the PR spin anyway. Not surprisingly Dieselgate, was not mentioned but the German firm’s commitment to the Paris climate change agreement was. From 2019 to 2023 Volkswagen is investing €9 billion solely in e-mobility. The next ten years will see 10m electric cars produced by VW in its plants in Europe, China and the US.

With the ID.3 VW says it’s starting in the middle of the car range, an approach that it says has always adopted successfully.

Ireland’s 34 Volkswagen dealerships are becoming EV enabled and its network will be online by the time the ID.3 hits our shores in middle of next year.

This is focaccia, but not just any focaccia
8

H. pylori: tackling the germ behind stomach ulcers and cancer
9