Road test: This motoring homage to the 1968 movie starring Steve McQueen has the star power

A movie prop or a petrol head's dream? We take the Ford Mustang Bullitt, based on Steve McQueen's car from the 1968 movie of the same name, for a test drive. Video: Neil Briscoe 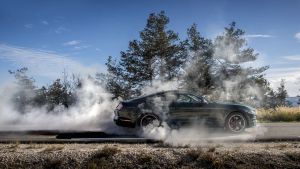 With the V8 in full roar, the screech of tyres laying down a layer of rubber on the road, and smoke rising from the rear, it’s a wonderful way to wake up your neighbours

Never underestimate the power of nostalgia. At a time of uncertainty, there is no surer way to sales success. Just ask Donald Trump or Nigel Farage. Human memory is a fickle function.

You should approach the Ford Mustang Bullitt with a wary cynicism. You know this is marketing malarkey, hooking a modern car on 1968 movie. The fact that the pony badges on the back and on the steering wheel have been replaced with the logo from the movie – made before the chief engineer for the current Mustang revival was even born – should generate a sneer of contempt, not a smile. On the cusp of a new age for motoring, this is a Trumpian monument to the past.

Yet there is something about this American muscle car that is mesmerising. Part of that is definitely down to the movie. Petrolheads have whiled away many hours arguing the merits of various movie car chase scenes. While the ranking may differ through the generations, no one has ever missed out on a mention of Bullitt. Steve McQueen was the epitome of cool, the dark green Mustang his perfect co-star. The car chase became famous, partly because the rest of the movie is rather dull. The Mustang’s scene made the movie.

So can this car make you a star? Certainly on the streets of Dublin it would seem so. Few cars draw as much attention from passersby as a Mustang, even now after sales in the Republic have entered triple digits since the latest generation took to our roads in 2016.

The Mustang’s 5-litre V8 engine is a 20oz Porterhouse steak in a world of quinoa casseroles. It’s the antithesis of eco-motoring. The only green thing about this car is the colour, so-called Highland Green in honour of McQueen’s GT Fastback.

Ford claims a fuel “economy” figure of 12.4 l/100km (22.7 mpg). Its emissions are 277g/km, which means the government hits you with a whopping tax bill when you buy it, and then demands €2,350 every year thereafter for the paper disc on your windscreen. Owners may not do much for the environment, but they’re a major boon to the exchequer.

Hit the start button and it bellows out its V8 rebel roar. That gurgle took a lot of work: it’s partly down to some acoustic engineering that makes it mimic the movie car. There are other bells and whistles added to make you more McQueen.

The car itself is putting out nine more horsepower than the “regular” V8 Mustang. The sweet short-shift six-speed manual comes with rev-matching, which means you don’t need to master heel-toe blips when downshifting to get the most out of the car.

For some reason the car is fitted with a fantastic B&O 1,000-watt stereo system as well, though it’s hard to imagine why you would be listening to anything other than the soundtrack that’s booming out from under the bonnet, conducted by your right foot.

Then there is a feature called line-lock, which locks the front brakes, but lets the back wheels spin freely. With the V8 in full roar, the screech of tyres laying down a layer of rubber on the road, and smoke rising from the rear, it’s a wonderful way to get to wake up your neighbours on a Monday morning.

Out on the road, it handles like a muscle car, with all the boons and bugbears that entails. It’s surprisingly good through the twisty stuff, though, and urges you on to keep your right foot on the throttle through the bends. Yet in truth it’s no sports car.

When the V8 growl is outlawed, replaced by a Star Wars Death Star whirr or a digitised soundtrack, we’ll really miss the Mustang

And it has the same foibles of the current car, a near non-existent back seat and some fittings that are too blue-collar for a car with a €70,000 price tag. Yet, none of this negates the fun it delivers the moment you nestle into the Recaro racing seats.

True, it’s more a movie homage than a major makeover to the current 5-litre Mustang that’s already on the roads. And you can spend €70,000 for an equally sporty but more fuel-efficient rival. But none will have the heritage of the Mustang, nor will they represent a metal bookmark for the end of an era of muscle cars.

When the V8 growl is outlawed, replaced by a Star Wars Death Star whirr or a digitised soundtrack, we’ll really miss the Mustang. In my Lotto winning garage, there will always be a stable for this pony. And why not make it one that pays tribute to the movie that made it an international star.