To the manor born? Nine country estates to buy now 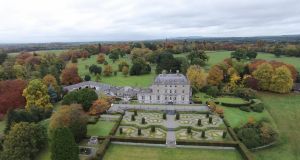 Designed in 1773 by noted architect James Wyatt, and home to the de Vesci family for more than 300 years, the main property of this historic estate took four years to renovate, with all 117 windows replaced.

Set among 1,120 acres of grounds, including walled gardens and farmland, there are no less than 10 estate houses and cottages, in addition to the nine bedroomed 2,500sq m (27,000sq ft) Italianate-style mansion.

Abbey Leix has one of the most important collections of trees in Ireland. Whereas elsewhere in Ireland the primeval forests of oak, birch, alder and willow have been almost entirely depleted, the woods across the river from the house are among the best surviving examples of Ireland’s ancient woodland.

In his book Abbey Leix: An Irish Home and its Demesne on the restoration, which now gives a fine balance between practical living and grandeur, author William Laffan remarks: “Abbey Leix gives a sense of the longue durée of Irish history. Having been home to French Monks, O’More Princes, Ormonde Earls, de Vesci Viscounts and a Welsh Knight, the house, its park and woods form a microcosm of our past.”

One of the finest houses in Dublin, Seafield House in Donabate is believed to have been built nearly 300 years ago by the classical architect Sir Edward Lovett Pearce, who also designed some of Ireland’s finest buildings such as Castletown House and the Irish Houses of Parliament (today the Bank of Ireland) on College Green.

The house is currently owned by Liam and Kaye Cronin, who purchased the Palladian mansion in 1996 for just under IR£1 million.

Its refurbishment, retaining original features, took more than a year, and an estimated IR£3 million to complete. It involved a complete rewiring, re-plumbing, reroofing and upgrade of windows and bathrooms, and even the addition of a new flight of granite steps sweeping up to the front door.

The grounds of this mansion, which extends to 895sq m (9,364sq ft), consist of 80 acres of planted parkland, a kitchen garden and formal gardens. It’s quite a rarity to have such a vast expanse of private lands so close to Dublin city.

Parts of this Tudor-style manor house located a half-hour drive from The Curragh, and sitting on 256 acres of pristine land, date all the way back to 1576.

In 2000, the entire house underwent renovations by the current owner Californian commodity trader Rick Barnes, which took more than two years to complete, and now offers seven bedroom suites in the main property.

In addition, the lands were turned from what was a dairy farm into a stud farm with a proven equine legacy. Winners Heatseeker, Sarah Lynx and Coral Wave have all called Grangecon home.

Thirty-three post and railed paddocks, and 56 stable boxes between mares, yearlings, and foaling yards - all of which have rubberised flooring and CCTV - now sit within the pristine picture-perfect gardens, which include a ha-ha, a trout-filled lake and formal enclosures.

The main house extends to 1,199sq m (12,905sq ft), adjacent to an old chapel, which retains some beautiful craftsmanship on the ceilings.

Throw in three quaint period gate lodges, a three-bedroom manager’s house and a groom’s apartment above the stables it amounts to a total of 1,569sq m (16,888sq ft) of additional accommodation.

Home to singer-songwriter Chris de Burgh and his wife Diane since 1996, Bushey Park, an eight-bedroom Georgian mansion on 27 acres in Enniskerry, underwent a renovation that took a whopping seven years.

A lift and panic room with 2-inch-thick steel doors, as well as custom-built furniture, state-of -the-art heating and insulation and a 600-bottle cellar, were included to works in the house which now extends to 2,337sq m (25,685sq ft).

In addition to the main residence, which also has a gate lodge and guest cottage, the property includes a two-storey leisure complex with a screening room, games room and indoor pool, along with restored stables which have room for four ponies.

The grounds also include a levelled area for football, a tennis court and a walled garden on 27 acres of parkland located just outside Enniskerry village.

This 482sq m Victorian house, painted a vivid purple, was built in 1864, and includes a coach house and heated outdoor pool. In the 1960s, it was owned by Prince Emich Fuerst zu Leimingen, said to be a descendant of Queen Victoria’s mother, and in the 1970s was owned by local man Joseph Kenny. It was subsequently purchased by West Berliner Kurt Jager in 1985 – reportedly for more than €100,000 – and he extensively renovated it over the years, according to the current vendors, six close friends of Jager who inherited it from him in 2015.

Its setting is quite idyllic, with the popular boating spot of Garrykennedy just down the road. The property has been used as a holiday home and has a wealth of amenities on site, including the pool, stables, sauna and Jacuzzi, tennis court, private access to the lake, an orchard and a historic round tower thrown in for good measure. The property lies on 20 acres just 15km from the towns of Ballina and Killaloe.

Dollanstown is an equestrian, agricultural and residential estate with an international-standard event course. The equestrian ancestry of the property dates as far back as the late 19th century, when renowned horse trainer Peter Purcell Gilpin took over the house from its original owners, the Hamilton Smythe family.

Some of Dollanstown’s famous residents include the mare Pretty Polly, winner of 22 races, and Sassafras whose career highlight was success in the Prix de l’Arc de Triomphe. Both horses were reared here on the estate, which includes 71 stables in five yards with two outdoor and one indoor arenas.

Accommodation includes the seven-bedroom main house, where the staircase was cited by the Irish Georgian Society as “one of the finest examples of an unpainted hand-carved wooden staircase in Ireland” and six estate houses. The property on 284 acres is seeking €7.5m. It was originally seeking more than €9m in 2018, but that price included 364 acres of land.

The early 18th-century Georgian mansion is nestled in the heart of rural Meath and surrounded by 120 acres of parkland, paddocks and mature woodland. The estate is a rarity among Irish country estates in that it has been lived in by the same family for more than 250 years, and is now home to Arthur Pollock and his family.

The extensive stable yard was operated for many years as a successful stud by Diana and Johnny Pollock, who also carried out a significant refurbishment of the 10-bedroom mansion in the late 1980s, which included reroofing and rewiring the property and restoring the beautiful ornate plasterwork on the main landing.

Outside there is a restored garden house, a stable yard, a former coach house in use as accommodation, an old stone farmyard and 22,000 new trees. The property came to the market in 2015 seeking €4.15m, it is now reduced to sell at €2.75m.

This Victorian mansion is magically positioned within some 25 acres on the shores of Dromineer Bay, with a boat house and direct access onto Lough Derg. The 1,013sq m (10,904sq ft) eight-bedroom waterfront house is one of the best positioned historic houses on the lake, as it is completely private, lying deep within its lands and only visible from the water.

Surrounded by mature Victorian-designed gardens, the vistas from the house are superb, over wild flower meadows to the vast expanses of the lake to the north and well-timbered mature parkland to the south.

The grounds include a substantial boathouse, a stabling block and machinery shed and numerous mature shrubs and trees.

New owners of this impressive Gothic manor house located just outside Carlow town will need wellingtons to traverse the 30 acres of gardens and parkland overlooking the river Barrow.

Indeed the boots take their name from a former owner of the house: Arthur Wellesley, 1st Duke of Wellington, the Iron Duke who saw Napoleon fall at the Battle of Waterloo under his command.

Although the aristocratic Anglo-Irish Wellesley family’s principal residence was at Dangan Castle in Co Meath, the Duke, after whom wellingtons take their name, acquired a portfolio of properties, including this gem, where he reputedly installed a mistress.

The bow-fronted brick house on the sought-after Kilkenny Road near Carlow’s Institute of Technology has 511sq m (5,500sq ft) of elegant accommodation in a very private setting along the banks of the Barrow.