Victorian country house in Tipperary with 50 acres for sale for €1.9m 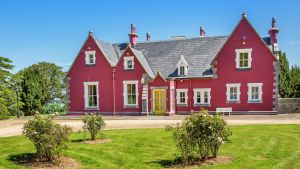 A Victorian country house on about 50 acres near the shores of Lough Derg, a holiday home for the past 34 years, has a heated outdoor swimming pool, a restored coach-house, a tower house and views of the lake. It also has private access to Lough Derg across a country road, with a waterfront of about 250m and its own small harbour entrance. The marina at Garrykennedy village – a popular spot with sailors – is some 700m from the property’s north gate.

West Berliner Kurt Jager bought Garrykennedy House in 1985 – reportedly for more than €100,000 – and extensively renovated it over the years, according to the current vendors, six close friends of Jager who inherited it from him in 2015. They have carried out renovations to the roof since then.

The house, painted vivid purple, was built in 1864 on lands originally granted in 1668; the coach house and old stone walls on the property date from the Georgian era. In the 1960s, it was owned by a Prince Emich Fuerst zu Leimingen, said to be a descendant of Queen Victoria’s mother and in the 1970s by local man Joseph Kenny, a brother of starry 1960s London theatre designer Sean Kenny.

The owners of Garrykennedy say that its views are their favourite thing about the property: built on a rise, it has views from both inside and outside the house of surrounding countryside and of Lough Derg. Accommodation in the two-storey-over-basement house includes interconnecting reception rooms which have bow windows with views of the lake in the sittingroom and livingroom. The rooms have high ceilings, sash windows and large open fireplaces, like the diningroom behind. A large kitchen/breakfastroom opens on to a terrace outside; other accommodation downstairs includes a larder, a laundry room and a bathroom. New owners will most likely want to modernise the kitchen and bathrooms.

Upstairs, there are five bedrooms, one currently used as a study, as well as two bathrooms. A large room in the basement is billed as a playroom in the floor plans, but could be used as a gym, cinema room or sittingroom, suggests the agent. There is a sauna and jacuzzi at this level too.

Outside is a courtyard with the coach-house, three stables and the tower house. The two/three-bed coach-house, with a kitchen, utility room and bathroom, is currently listed on Airbnb at a rent of €45 a night. The sheltered outdoor heated swimming pool is in a walled garden; there’s also a tennis court.

There are terraces and patios close to the house; the lands are laid out in fields, paddocks and woodlands with plenty of mature trees. A small country road divides the property, with 10 of the 50 acres by the lakeside.

Water comes from wells on the property; the main house and coach-house each have a septic tank.

Garrykennedy House is near Garrykennedy village, a popular spot for sailors on the Shannon, with a marina and two pubs, known for traditional music. It’s about 15km from Ballina/Killaloe, 13.5km from Nenagh and the M7 and 58km from Shannon Airport.