End of a 250-year era at Meath estate

Mountainstown House has been in the Pollock family since the 1750s. Located on 120 acres, it has some striking features and comes on the market asking €4.15 million

Mountainstown House is located outside Navan, Co Meath, and is a rarity among Irish country estates in that it has been lived in by the same family for more than 250 years. Video: Bryan O'Brien 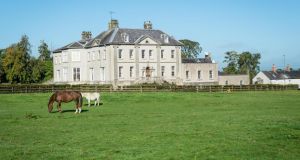 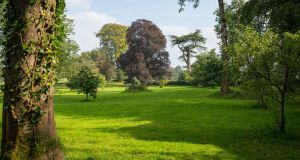 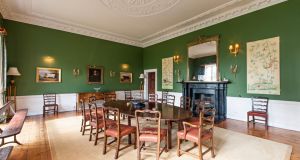 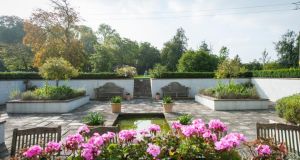 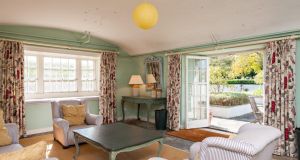 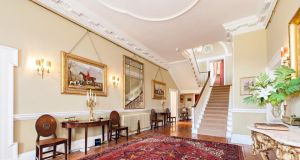 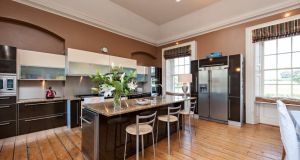 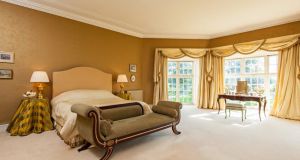 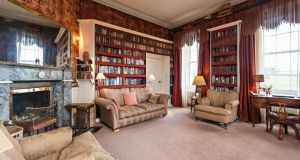 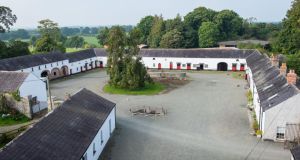 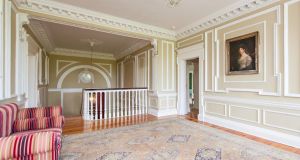 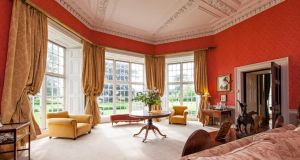 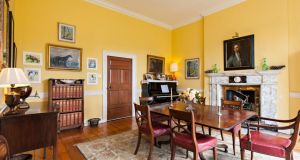 Mountainstown House is located outside Navan, Co Meath, in the townland of Castletown Kilpatrick, and is a rarity among Irish country estates in that it has been lived in by the same family for more than 250 years. Today it goes on the market through Savills for €4.15 million.

The Pollock family moved into the Georgian property – originally on 700 acres – shortly after it was built in 1740 by Samuel Gibbons. The addition of a more grand south-facing wing in 1810 ensured it didn’t miss out on the decorative flourishes of that era, and Mountainstown features many interesting architectural details including the plaster-cast death mask of original owner Samuel Gibbons looking down from the centre of the main hall ceiling.

There’s also a novel boar theme running throughout the house representing the Pollock family crest awarded after a family member serving under Louis XIV reputedly saved him when he killed a charging boar with an arrow. Gilded boars appear above the original pelmets, and centred on a huge specially commissioned gilt mirror above the drawing room mantelpiece.

The original buyer, John Pollock, was a Dublin solicitor with a town residence on Mountjoy Square, and many of the fine trees on the estate were planted during his time there. His son, Arthur, developed the lands mainly for sporting and agricultural pursuits and he was one of the founding patrons of today’s Meath Hunt.

More recently the extensive stableyard was operated for many years as a successful stud by Diana and Johnny Pollock. Diana also carried out a significant refurbishment of the 10-bedroom mansion in the late 1980s that included reroofing and rewiring the property and restoring the beautiful ornate plasterwork on the main landing.

In 2004 the family mantle – now on 120 acres – was passed to the current owners Arthur and Atalanta Pollock when they moved back from Kentwith their three children Marina, Josephine and Johnny.

Atalanta, who grew up in nearby Kilmessan and is a descendent of the Wingfields (historic owners of the Powerscourt Estate in Enniskerry), knew the Pollocks from childhood and remembers dancing at teenage parties in the basement to the strains of Status Quo.

Since returning they have transformed Mountainstown into a very liveable family home. An artist by training, this wasn’t a matter of outsourcing the work and signing the cheques. She handmade 52 pairs of curtains, overhauled the vast attic and basement areas, and installed a bright dual aspect Italian Scavolini kitchen where the snooker room once stood.

They also set about making the garden an extension of the house by planting 22,000 trees, thousands of tulips and daffodils and building a formal boxhedge garden and a raised terrace linking to the drawing room, while a sunken garden was laid to patio with raised beds at the rear of the house off the garden room.

The original design of the property takes full advantage of its sunny aspect, and the main reception rooms flow off the main hall and interconnect from the library, through the breakfastroom, to the drawingroom and on to the vast diningroom. All are flooded with light through tall windows of original square-paned glass.

Impressive enduring original features include the very fine marble fireplaces in almost every room, including in the attic (the original servants’ quarters) now a lovely three bedroom apartment. The library still has its original ox-blood leather wall covering, and the turned Doric banisters on the main staircase are flanked by fine plaster wall panels. The four bedroom suites take in views of the garden and the paddocks in the distance, while the master is a real highlight set in the same footprint as the drawingroom below.

Mountainstown House is not pristine but that’s part of its appeal. The decision to sell has been very difficult, says Atalanta. “Grand family homes have passed their practical use. For generations this house was lived in by people that worked the land, but that’s not our experience. It is much more healthy for the kids to be independent and not to have to carry on that pressure of fulfilling the family destiny.”

Outside there is a restored garden house, stableyard, a former coachhouse in use as private accommodation and an old stone farmyard.