Chris de Burgh has put his Co Wicklow home on the market for €12.5 million. Bushey Park is set on just under 11 hectares (27 acres) and is one of the priciest country estates to come up for sale since the property-market recovery. Video: Sothebys 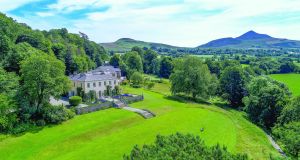 Chris de Burgh has put his Co Wicklow home on the market for €12.5 million. The singer bought the Georgian mansion, Bushey Park, in 1996; set on just under 11 hectares (27 acres), it is one of the priciest country estates to come up for sale since the property-market recovery.

De Burgh, who is best known for Lady in Red, his 1986 hit, purchased the eight-bed house, on the outskirts of Enniskerry village, from the Bisgood family in 1996 and spent seven years refurbishing it. The lavish renovation extended to a 140sq m (1,500sq ft) guest cottage, restored stables and the addition of substantial new buildings.

De Burgh says he was very familiar with old houses, having spent much of his childhood in a 12th-century Irish castle that his parents ran as a hotel. “I used to go to a lot of these houses and see their old owners hunched around fire, trying to keep warm.” Determined to avoid such hardship at Bushey Park, the singer upgraded the 2,337sq m (25,685sq ft) property with state-of-the-art heating and insulation.

Other additions include a lift, a panic room with 5cm-thick steel doors, and purpose-built furniture. De Burgh, who lives at Bushey Park with his wife, Diane, has indicated that the furniture could also be available to purchase.

The couple’s three adult children, including the former model and Miss World Rosanna Davison, have now flown the coop. “There’s no financial need,” de Burgh says. “I don’t have to sell this place. I just think it’s too big for two people.”

The house has a main reception hall, a morningroom, diningroom, study and familyroom, along with an eat-in kitchen and a 600-bottle wine cellar; all eight bedrooms are en-suite.

The property which is for sale through David Ashmore of Sotheby's International Realty also includes a two-storey, 1,115sq m (12,000sq ft) leisure complex with a screening room, game room and indoor pool. This complex and other accommodation came under scrutiny by Wicklow planning authorities recently; before putting Bushey Park up for sale, de Burgh had to apply for permission to retain substantial unauthorised works extending to about 445sq m.

The grounds also include a levelled area for football, a tennis court and a walled garden.

Paving in the courtyard was completed with stones de Burgh spotted in Bayreuth, in Germany, while staying close to the railway station. “I contacted Deutsche Bank through a friend of mine who lives in Heidelberg and bought 350 tons of them, which they pulled out of the ground and transported across Europe in 15 trucks.”

De Burgh’s downsizing plan will mark a return to home for the singer: extensive works are nearing completion at Aelagh, his property on Rockfort Avenue in Dalkey, south Co Dublin, where the family lived before moving to Bushey Park. It has been refurbished and extended in recent months, bringing the house to 353sq m (3,800sq ft), with a separate mews.

De Burgh also owns three neighbouring houses, ensuring absolute privacy in his new home on the outskirts of the village. The entire site, taking in two properties on Tubbermore Avenue and another on Rockfort Avenue, comprises about 0.5 hectares (about 1.25 acres).