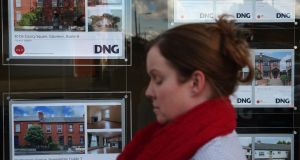 The biggest factor impinging on the new homes market is the future of Help to Buy(HTB). The Government scheme, which enables first-time buyers reclaim taxes for a deposit, has been a huge boon for buyers but is due to run out at the end of the year. A decision about extending, or reformulating it, is due in October’s budget. That’s too far away, say estate agents and mortgage brokers.

Any changes to the scheme would be “disastrous” , according to Ken MacDonald of estate agent Hooke & MacDonald. “We know from our own research that 80 per cent of our purchasers would not be buying if not for Help to Buy. Any alteration to it would be disastrous for the new homes market. In the current market conditions it is certainly needed while the current Central Bank regulations are in place.”

The firm, which has new homes schemes coming on stream in Lucan and Citywest this autumn, as well as in Dublin commuter belt towns such as Naas, Kilcock and Dunshaughlin, recorded “buoyant” sales throughout the summer and has seen an increase in enquiries in recent weeks, which he attributes to uncertainty about the scheme’s future. Even tweaking it would cause problems for buyers, he suggests.

“If they reduce the threshold from €500,000, it would rule out people who need to buy four bedroom homes for growing families. Given that the HTB scheme is actually self funding from the Government’s point of view, insofar as over 30 per cent of the sale of each new home goes back to the Exchequer in taxes and levies of one form or another, I think from a political point of view it would be a mistake.”

Ivan Gaine, managing director of new homes at Sherry FitzGerald is of a similar view: “We would like to have certainty around Help to Buy.” Currently 80 per cent of what Sherry FitzGerald New Homes sells costs less than €500,000, and 40 per cent is under €360,000, making the scheme of vital importance to its core first-time buyer market.

Meanwhile the company is bringing a number of schemes to market this autumn and is optimistic about growing “sale agreed” volumes by 15 to 20 per cent.

The fact that prices are stable and there “are no surprises out there so no mad rush” mean it’s how the buyer reacts to changes in the Help to Buy scheme that is likely to have the most impact on activity in the months ahead.

Though summer is traditionally a quiet period for the sector, Sherry FitzGerald reports 124 new house sales in July, up from 100 in the same month last year. It is bringing 60 projects to market in Dublin, Cork, Galway and Limerick in the coming weeks.

“We’re not releasing 35 units and expecting them all to sell in a weekend. We are seeing a longer selling period, which gives people time to consider but we still need more supply of everything – sales, rentals and social housing. The risk is that developers and promoters row back instead of move forward,” Gaine says.

As small, private landlords exit the market it is reducing the availability of rental stock. And while the major investors in the private rented sector (PRS) are garnering lots of press attention, “it will take years for the big investors to get their apartments going”, Gaine says.

About 310,000 tenancies are managed by “Mom and Pops”, he says, compared with just 10,000 accounted for by multi-unit players such as IRES and Kennedy Wilson. “For every two landlords leaving the market, only one is coming in.”

The property market may be ripe for disruption in other ways too. Peer to peer lender Propertybridges. com is already financing small and medium sized developers and construction companies.

The figures are small, with lending of just €5m to seven projects to date, but it has ambitious targets to lend €100 million to fund 100 projects – 3,000 new homes in total – within three years.

It recently announced an investment partnership with Lagan Investments, founded by north of Ireland housebuilder Kevin Lagan, and Enterprise Ireland, which will help it scale.

Initiatives like this might lead to more affordable homes coming on stream and narrow the current gap in development.

“In some cases developers have bought land too expensively in recent years and the only way to make it back is to sell to a particular end of the market,” says Dermot O’Leary, chief economist at Goodbody Stockbrokers.

“That’s why there has been a bifurcation between the lower and higher end of the market.”

Its analysis showed that in Dublin, in the first half of this year, the only price points that saw an increase in sales were properties between €325,000 and €400,000. “That says to me that if you can build a house at a price point people can afford, there are mortgages out there and there is demand for it.”

Large private construction companies are outperforming the market, and have a higher proportion of the lower end of the market, which backs this up, he says.

Goodbody is assuming 21,000 new house completions this year, and predicts 24,000 for next year.

The big swing factor will be what happens in apartments. While there has been a surge in planning applications for schemes, particularly in the build to rent sector, there are questions over the viability of these, particularly in relation to funding, he cautions.

David Browne of Savills believes now is a good time to buy, and not just because it’s his job. He’s house hunting too. “I think the market has levelled out,” he says.

Savills has new homes in Adamstown and St Josephs in Clonsilla coming on stream. Prices will be in the early to late €300,000s for both, making them of prime interest for first time buyers. All they need now is clarification on Help to Buy and whether it will continue.

“We need certainty, and sooner rather than later. There’s enough kicking the can down the road going on across the water, without starting it here too.”

Renting by the numbers

High rents are persisting even though house price affordability is improving. Earnings growth, which has been improving over the last three quarters, stands at 3.4 per cent nationally, while house price inflation is at 0.1 per cent.

So why are people renting? Gemma Lanigan of estate agent DNG says it could be that they are gig workers who can’t get a mortgage, or were stung in the recession and don’t want one, or they simply can’t save for a deposit because of costly rent. Meanwhile, migrants and internationally mobile professionals can be equally comfortable with renting or buying.

It may also come down to that critical property factor – location, location, location. “All the new houses are currently being built on the fringes of the cities. People may have looked at the commute, factored it all in and decided it’s not for them, they’d prefer to stay in a city centre location and pay the extra to rent,” Lanigan says.

Irish family stuck in Cyprus: ‘We hope our flights home are cancelled’
4

Michael Caines: ‘You’re hanging upside down and you see a hand, lying there, and your arm’s gone’
7