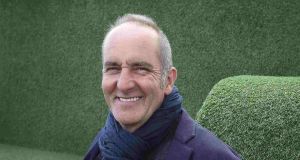 Local residents claim a flagship development built by TV property guru Kevin McCloud’s troubled housing empire, which was supposed to have been completed in 2018, resembles a “bomb site”, with unfinished roads and pavements, and homeowners forced to contend with building-site conditions.

In its sales brochure, HAB Housing – founded by the Grand Designs presenter – described Lovedon Fields in Hampshire as “a collection of beautiful three, four and five-bedroom homes” boasting facilities including allotments, play areas and a wildflower meadow.

However, local councillor Jackie Porter said the site, where many of the properties were sold for more than €1 million, was in a “dreadful state”. She added that some of the roads “don’t have the tarmac on,” while a number of homes had “major problems” that needed to be put right. Several are still covered in scaffolding.

Porter added that many of the benefits HAB promised to the community, including allotments, an orchard, a cycle path and two electric cars with charging points, had yet to be delivered.

“There’s a building site where the orchard and allotments should be,” said Porter, a county and city councillor who lives less than two miles from the site. She added she did not want “the public purse” to have to pay for “HAB’s mess-up”.

HAB has not denied there have been problems but added it had been carrying out work on the houses and providing frequent progress updates.

The claims relating to the development in Kings Worthy, near Winchester in Hampshire, deal a fresh blow to the Channel 4 presenter, whose property empire has been hit by financial problems.

Last month it was revealed that small investors who sank millions of pounds into McCloud’s eco-friendly housing ventures have been told they could face losing up to 97 per cent of their money.

Worst-hit are almost 300 small investors who put €2.7 million into a “mini-bond” scheme offered by HAB Land in early 2017. Another set of investors, who sank €2.1 million into HAB Housing in 2013 and were told to expect dividends of at least five per cent by the end of 2016, said they had not received a penny and had been “fobbed off”.

On September 10th it emerged that attempts to restructure the HAB Land bonds had failed, despite the investors having been effectively warned that if they did not back the proposals, HAB Land was at risk of being wound up or falling into insolvency. The directors of the company said they were considering their “next steps”.

Lovedon Fields is a 50-home development with prices originally starting at £467,500 (€526,800). It received planning permission in 2015 and, according to Porter, it was originally due to be completed in 2017, though this was later pushed back to the following year.

It is understood the first residents moved on to the site in mid-2017. But in March 2019, following a newspaper article that highlighted problems at the development, McCloud acknowledged residents had received a “poor service,” adding: “I’m personally very sorry for the delays and problems caused… and I am putting a plan in place to fix them.”

More than six months on, locals claim there is still a catalogue of problems to deal with. A nearby resident said: “The financial scandal for bondholders is only one half of the story – the other is the more human and as awful: the poor house owners left with totally unfinished roads/site/amenities.”

He added that the biggest worry was that locals could be left with “a bombsite of a legacy to gaze upon, let alone all the snagging/repairs that need doing on the houses themselves”.

Porter visited the site on September 14th and took a series of photos. She said several homes had major problems, adding: “We know we’ve got water ingress into some, [and] a cooker wired into the incorrect circuit.” Her photos show several properties covered in scaffolding. She added that “the sides of the road are crumbling,” and that some of the roads were not finished.

“It’s very disappointing and could cost the community a lot to put the dreadful state of the site to rights, but I’m determined it should not be a public expense,” added Porter.

In a statement, a HAB Land spokesperson said: “With regard to our Lovedon Fields development, understandably, we have been prioritising works on the houses of our homebuyers which we have been diligently undertaking. Throughout this process we have been in continual dialogue with our homebuyers, the parish and city councils, and other stakeholders, with frequent updates on progress and planned activities.”

The spokesperson added that the directors were continuing to explore and evaluate all options after the vote put to bondholders did not pass. – Guardian