Space saving tables that fold up and away 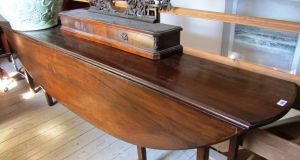 Adam’s At Home sale on St Stephens’ Green tomorrow, and Matthews Interesting Antiques and Interiors sale in Kells today and tomorrow, offer a good selection of antique tables to suit all price brackets.

Mortality has both frightened and fascinated mankind since the beginning of time and the Irish tradition of waking the dead gave rise to a particular table that will sit comfortably in today’s smaller city homes.

The hunt or wake table had two major uses in the 18th century Irish house.

Due to the size of the central plank being the exact width of a coffin, it was where the coffin bearing the body of the deceased was placed, and around which the funerary rituals carried on through the night, never leaving the corpse alone.

Its second use, due to its lightweight nature and mobility, was as a table moved outside to serve drinks at the entrance to larger country homes during fox hunting, where riders on horseback would imbibe hot toddies.

While these uses are mostly confined to the past, many country homes still have these pieces as part of their collections. These tables are really versatile for more confined spaces in apartments and city homes.

Due to the narrow central plank measuring just over 20 inches, and drop leaf sides, they will quite happily sit behind a sofa or against a wall, and can then be used for entertaining when a large seating arrangement for diners is called for.

Depending on size, which normally ranges from six to 11ft feet in length, the tables can accommodate between eight and 16 diners. The Matthews sale has two hunt tables listed, the first which is nine foot long is seeking €1,000–€1,500 with a smaller six-foot table listed at €200–€300.

Another period table which sits well and is functional in modern Irish homes is that of the breakfast or supper table, so called as it was a much smaller affair than the vast dining tables in many country homes. These make for an elegant dining table for more compact spaces and will accommodate up to six for dinner.

Adam’s has a particularly lovely rosewood table on out-scrolling legs, which is listed at €400–€600. Matthews have two; the first is an exceptional Italian marquetry mahogany version for €400–€700 and a simpler Victorian walnut piece for €100–€150.

Indoor games were all the rage in Victorian times, so much so that tables were created specifically to house board games, and these pieces work today as occasional tables for lamps and plants in addition to their original use as a games compendium.

Matthews has two fold-over games tables, a Victorian piece at €250–€350 and a William IV games table at €150–€250. Adam’s French mahogany and leather games table, which also functions as a writing desk, has a detachable top to reveal an interior inlaid for backgammon, is simply a beautiful piece (€1,500–€2,000) as it their French tulipwood and marquetry games table from the mid-19th century €1,500–€2,000.

For much smaller spaces, the early Irish Victorian mahogany patience table, on rope twist legs, used for the card game in times gone by, is also available through Adam’s (€600–€1,000)

And when space is really tight, sometimes a half is better than a whole, and that is when the beauty and practicality of a demi-lune or semi-elliptical table comes into play.

With a curved front adding interest, the straight back of these tables allow them to fit into in the tightest of spaces. Matthews has a George III unit listed for €70–€120 and Adam’s has an important Irish walnut and rosewood piece by Hicks of Pembroke Street in Dublin for €600–€1,000.

Also for tight spaces is the George III tilt top table (€600–€800 at Adam’s), which would have been used for serving wine in the 18th century. The fact that this table folds up vertically for storage without taking up too much space allows it be used for occasional dining.

For simple unadorned works, old chamber tables, which were used in bedrooms in Victorian times, make small straightforward pieces for any room. Matthews has three of these listed, all of which are George III, and prices range from €40–€120. Also without much embellishment is the colonial hardwood table which is listed as ‘restrained design’ for €250–€350. See adams.ie and matthewsaucttionrooms.com