The 77-year-old lives as generations before her did, without electricity or running water 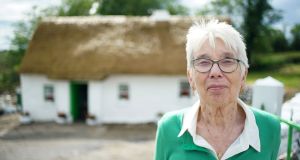 Margaret Gallagher outside her Grade A-listed thatched cottage in Co Fermanagh: “I’ll continue as long as I’m able and have the health and will to do it.” Photograph: Enda O'Dowd/Irish Times

Fire and water. These two elements are central to Margaret Gallagher’s life. Every morning she walks down the field to the well to get fresh spring water for the day. She revives the fire on the floor under the large chimney, the same fireplace her grandparents tended after buying the three-room cottage on the side of a hill a few miles from Belcoo, Co Fermanagh in 1887, for £30 10s 6d, from relatives who were emigrating.

The fire, “the lifeblood of the house,” is in the centre of the thatch cottage, which essentially has not changed over the past 100 years. There is no electricity, no running water (hence no phone, fridge or TV, either). The fire heats her home, cooks her food, and keeps the ancient bog oak timbers dry. Turf and logs are kept in the old byre and outside a motley collection of buckets collect rainwater for plants and to “wash the street”.

The walls of the 200-year-old-plus, Grade A-listed cottage are built of spalls (small stones) and clay. The inside is plastered with a mix of cow manure, pig’s blood and hot lime. Gallagher (77) whitewashes outside every year. The roof, bog oak covered with leafy alder, was originally thatched with flax, later rushes secured with sallyrod, and now organic rye straw secured with willow.

Margaret Gallagher’s life is both simple and complex, in that life’s ordinary tasks are harder and take longer. But their rhythm gives meaning and comfort, and strengthens her connection with past lives.

Gallagher’s family simply never got electricity. “We never identified the need to change anything. My father was in bed, and he didn’t want the disruption.” The life she lives just happened, and she has embraced it. “My take on it is, if it was good enough for them, then it’s good enough for me.”

On January 26th, 1942, “I was born into this house on Monday at five past nine in the morning”. Her sister Freda was born on October 6th, 1939. Their mother Winifred McGrath was a lot younger than her husband James Gallagher, but died aged 48, when Margaret was 10. As a child she went to school through the fields, and the sisters cycled into Belcoo – the twin village with Blacklion in the Republic – to buy slabs of salt to cure bacon in a teachest. Freda, “a great sister”, went to boarding school, and became a civil servant in England – “she kept my father and I in food and books”. She married and had a son, Ciaran, and grandchildren.

Margaret didn’t marry. “No one was the slightest bit interested in me.” Like in the cattle market reports from Enniskillen, she says, “demand wasn’t brisk!”

Her father had severe rheumatism and spent his last 17 years in bed, and she cared for him and ran the 12-acre (“two cows’ grass”) farm. She describes him instructing her, aged 10, through the window from his bed, how to calve a cow.

“They were the best years of my life. He was strict, yes, but he was lovely, and so agreeable, an absolute saint. He loved people and chatting,” and would read the Daily Mail aloud. Her father died “at a quarter to four on the 26th of June” in 1980, aged 92. Eight years later Margaret Gallagher got a job for the first time, aged 48. The adjustment was difficult for a soul used to solitude.

She worked in community development and founded the Belcoo & District Historical Society. She’s active in Cleenish parish, is a retired Justice of the Peace and a director of the local community care centre. While she lives life in much the same way as her forebears, this sparky, thoughtful and dry-humoured woman is no museum piece in a calico petticoat, but sociable and active in her community.

As she poses for a photo she teases Enda, “Do I look strikingly beautiful?” “You do,” says he. “That was far too fast to be genuine,” she observes with a twinkle.

She has lots of visitors, and explains her way of life, reeling off the details of her home. While she likes meeting people, her interactions are by choice.

Gallagher has been lauded for conserving thatch heritage and vernacular architecture, has met Queen Elizabeth (“a gracious lady”), and Prince Charles several times, including once to receive an MBE for community development in 1994. Margaret, Freda and her family went by limo to the palace and for afternoon tea at the Ritz. She cherishes the shoes she wore that day.

As well as photos, certificates and oil lamps on the walls there’s a pair of tiny clogs her father wore as a child in the 1890s, a painting of her house, and a flax scutcher.

Smoke is drawn up the chimney, not into the room. On a single crook over it – one bar and chain – she cooks, and boils water in the ancient black kettle. She fries on a large frying pan on a stand fashioned from three horseshoes, and bakes bread and cakes in cast-iron pot ovens. She shows us how: dough into a cake tin, which goes into the pot oven, place hot sods on top of the lid, then hang over the fire. It takes the same time to bake as a conventional oven (her soda bread and orange and vanilla cake are delicious). She cooks pancakes on a flat griddle pan, and makes toast for us, on a fork over the fire.

Gallagher loves bacon, cabbage and spuds, or chops. “It’s hard to beat an Ulster fry. I love meat. No pig would be safe when I’m around.” Also: “Someone has to eat chocolate – and I don’t seem to mind doing it.”

These are the things I use every day, that my father and grandfather have used before me

She manages fine without a fridge, buying meat on the day, and wrapping butter in a cabbage leaf to keep it cool. Dry food and longlife milk are kept in a blue wheelie bin at the side. She creates little waste. “I was green before it was fashionable.”

On the dresser there’s Cornish Blue tableware by Green Brothers, some first period Beleek, and four cake tins. Everything pre-dates her; they are “things that I use every day, that my father and grandfather have used before me”.

Beside the window a one-legged falling table, “a space saver”, slides over and upwards, doubling as a window shutter. The floor flags are sloped towards the door to allow water to flow onto the “street” outside.

After winding up her radio, she can listen for 11 minutes, to news headlines and death notices “to make sure I’m not on it”. The bedroom bookshelves are stuffed; she likes the Russians, especially Dostoevsky, and also Seamus Heaney and Yeats.

Her day is governed by daylight: she rises around 5.30am when she has more energy for basic tasks. Dinner is around 11.30 and tea (two hardboiled eggs, a sandwich or pancakes) at 2.30. She’s in bed soon after 6, as light is precious. Two double-wick paraffin lamps have mirrors to reflect the light, but oil is £4.95 a bottle and she prefers 65 per cent beeswax candles, which give good light. She keeps a solar torch under her pillow for nighttime and is dismissive of smelly candles: “a waste of space, and terrible black poisonous smoke”. And, here’s a turnup: she has a mobile phone, with a solar charger.

When she retired she bought a sick call set – blessed candles, crucifix, oil – for the priest to anoint her when she’s dying. It is laid out in her upper room, in readiness (“the things you have to do when you live alone”). You get “a certain span over 70, and I’m seven and a half over it. I’ll never die young anyway,” she says. She has great faith and though a recent accident set her back, great health (she looks 15 years younger than her years).

When she was 50, John Callister made a documentary, All I’ve Ever Known, for BBC about her life. She shows me his recent letter, saying it’s heading for a million hits; though “I’ve never seen YouTube, I’ve no interest”, she is well up to speed on what it is.

“Everyone’s entitled to live their life as they want to,” she says. At one with her environment, this is how she has always lived and “I see no reason to change”. In winter “the perpetual rain and wind is difficult, but you rise above things. There are bad days but everything passes.”

While living in the same way as “two generations before me,” close to the earth, has been hard, “I’ll continue as long as I’m able and have the health and will to do it.

“Your way of life shapes you. This type of life gives me my own identity.”