Charming Victorian is a rare find on Galway’s Crescent for €1.35m 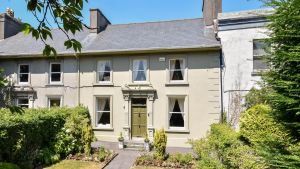 The owner of number 10 The Crescent in Galway says that in the family’s 27 years in the house, “they tried not to do too much”. A wise decision for a charming period house with a long list of original features in a 1837 terrace regarded as the only intact Victorian crescent in the city.

The Crescent originally comprised six double-fronted houses – number 10 is one of the originals – built as holiday homes overlooking Galway Bay and it has gone on to become a landmark in the city.

Since then the terrace has been added to and more significantly the city has grown up around it with what is now Salthill and White Strand built on reclaimed land to the front. The family are now downsizing from the four-bed, 179sq m (1,926sq ft) house.

The current layout would be familiar to its original holidaymaking owners – the upper front room is still used as a living room with two sash windows looking out over the street, the third window belongs to the interconnecting study. Three of the bedrooms and the family bathroom are on this level to the rear while the fourth bedroom with en suite is at ground level in the return.

Interior changes over the years included the installation by a previous owner of two fine white marble chimney pieces said to have come from the famous tenor Count John McCormack’s home. The original black and red quarry tiles are still in the kitchen and continued in the welcoming hall by black and white chequerboard flooring.

One major change was the conversion of the original detached coachhouse to the rear into living accommodation for use by the family’s adult children – a smart makeover overseen by the owner’s architect son.

Again it respects the building’s origins so that there is a loft bedroom and an open plan living/kitchen area at ground floor with timber panelling and white washed internal stone walls. That coachhouse is set in a lushly planted mature rear garden with sun-trap patios.

The front gardens too are beautifully planted, set behind their original Victorian cast-iron railings and gate. Vehicular and pedestrian access is to the rear on Palmyra Avenue.

Because of their history, style and rarity the houses in the Crescent are much sought after. When number 7, also a Crescent original, bigger than number 10, came to auction in 2017 it sold for €2.15 million – significantly over its AMV of €1.6 million.

Number 10 The Crescent is for sale through Sherry FitzGerald seeking €1.35 million.