We found asbestos buried in our garden, what should we do?

Property Clinic: Can we expect the previous owner of the house to cover some of the cost of removal? 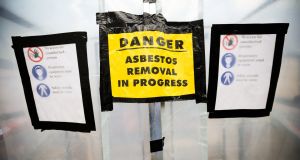 Burying asbestos, whether it’s in a garden, farm, or public land, is incredibly dangerous, not only for yourself, but for other people who may disturb the soil at a later date. Photograph: Getty Images/iStockphoto

My wife and I were digging in the garden of our home which we bought five years ago and we came across some asbestos that had been buried. It appears to be in one piece and not broken but we stopped digging immediately anyway to be on the safe side.

We’re not sure of the extent of it and would like to get it checked out, but we’re not sure how best to go about this. We’re also wondering if we can expect the previous owner of the house to cover some of the cost of removal.

Asbestos is a naturally occurring mineral, made up of long thin fibres, which can be dangerous if they are inhaled as dust. They contribute to increased risk of lung cancer, asbestosis (scarring of the lung tissue) and mesothelioma (cancer of the lining of the chest and the lining of the abdominal cavity).

It is now illegal to place asbestos or asbestos-containing products on the market.

Burying asbestos, whether it’s in a garden, farm, or public land, is incredibly dangerous, not only for yourself, but for other people who may disturb the soil at a later date. If asbestos is buried in your garden, the land will technically be classed as “contaminated”. The impact of this could mean that the land may end up being listed as contaminated on the land registry. This can result in your property being difficult to sell at a later date, unless it’s professionally removed and cleared.

Asbestos in soils will only present a risk if there is potential for asbestos fibres to be released from the soil and subsequently inhaled by site users. You have done the correct thing in stopping further excavation. You should never handle, disturb or remove ACMs yourself. Your next step is to get expert advice from a specialist asbestos monitoring/surveying company, by way of a risk assessment to identify the type of asbestos present. Further excavation works will be necessary to confirm if more ACMs are present.

You have not identified what “digging” you are undertaking. If you are doing a soft dig for landscaping, then it may be prudent to remove the asbestos.

The asbestos surveying company would be able to advise the correct course of action, via the risk assessment survey. If removal is undertaken, a specialist licenced contractor will need to be employed to undertake this work and the relevant certification issued once completed.

In relation to possible contribution of the removal costs by the previous owner, it’s possible that they too may not have known asbestos was buried in the garden. Burial of asbestos waste is strictly prohibited and can potentially lead to major fines and/or prosecution from the HSA and the Environmental Protection Agency under current legislation/regulations. I would suggest you take legal advice in this instance.

Michael Ferry is a chartered building surveyor and member of the Society of Chartered Surveyors Ireland, scsi.ie