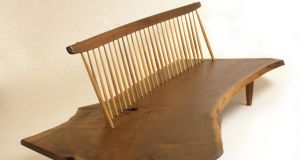 The work of George Nakashima (1905-1990), one of the most important furniture designers in the US in the 20th century, stands as a reaction to the exploration of new materials and manufacturing techniques. He first trained in forestry before switching to architecture and he designed furniture, he said, because it allowed him to control the making process from beginning to end. His woodworking skills were honed under the guidance of a craftsman he met while both were interned in the US during the second World War. Though control is a loose term – his driving design principle was that he worked in partnership with the tree, guided by it to create shapes and forms. He was, he said, looking for the soul of the tree and his furniture would give it a second life. His pieces, like this bench, with its perfect spindled back and almost crude wood slab seat balances the modern with the traditional. His work is highly collectable, a desk from 1986 sold in Sotheby’s in May for €80,000.