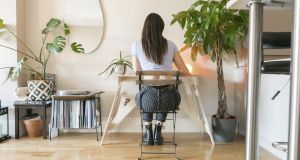 ‘Priced at €149, the desk is affordable, easy to assemble and is a simple fix to a problem everyone seems to have’

Necessity is the mother of invention. Flying Elephant Productions, a company that has worked extensively arranging events for the tech and beer and spirits sectors, as well as being behind the set-up of such festivals as Forbidden Fruit, took a mammoth hit earlier this month when 60 of its jobs were cancelled in a three-day period.

The company had bought a load of plywood sheeting for a job and had been trying to figure out what they might do with the timber. Designer Edwin Jebb, who has a masters in architecture, made the first desk for a friend. His background explains its elegant flat-pack design, which is 115cm long by 58cm deep. The desk was a hit on social media and started to gain traction.

The company sold almost 1,000 units and managed to retain its 17-strong team until the lockdown was announced last weekend. Even with the new restrictions, they’ve managed to keep eight staff on the payroll.

The directors are Max Fox and Michael Keelan who, together with Max’s older brother, Steve, their head of production, have successfully pivoted the business using smart, creative thinking.

“Priced at €149, the desk is affordable, easy to assemble and is a simple fix to a problem everyone seems to have,” explains Keelan.

There’s also a standing desk, 120cm by 60cm, that costs €195 and a kids’ version for all those parents trying to corral smaller children. It costs €99. The desks can be delivered the next day within the greater Dublin area.

In addition to the desks, the company has put acrylic countertop sneeze screens in every Applegreen in the country and in the grocery sections of Marks & Spencer, distributing more than 1,300 units so far. “We didn’t expect there to be such high volume,” says Fox.

You may have admired the firm’s work at Kale+Coco, a vegan cafe in Dublin 7, walked under its arch and over its infrastructure at Forbidden Fruit festivals or enjoyed a drink at one of its many pop-up bars for various brewery and distillery companies.

What started out as a public relations stunt to show the company was still in business has become a viable income stream. As it ramped up production, the company tweaked its manufacturing process, cutting down the number of tasks needed to fabricate. By cutting 2cm off the length of the sitting desk, it has managed to make 12 desks from 10 sheets of plywood. When it started, the company was only getting one desk per sheet, Steve Fox says.

Crucially, the directors have also passed on the design to another events production company in Australia – one that was far enough away not to be a competitor, they joke.

This company, Stage Kings, is now selling 250 desks a day to residents of Sydney and Melbourne. Flying Elephant isn’t getting anything from the move. The idea to share wasn’t for profit but it has swapped ideas and made some more changes to the desk on the basis of the Australian company’s suggestions. It’s a smart move because once isolation is over, the company can continue to partage ideas.

What will reopened childcare centres look like to staff and to children?
3