Hunker down in D14 semi with war-time shelter for €995k 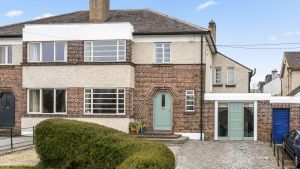 Number 4 Rathfarnham Park was built in 1933 by the popular builder, and it has changed hands just three times since then, the current owners buying about 10 years ago. They are moving on from the four-bed 216sq m, 2,325sq ft semi, trading up, placing the now extended house for sale though DNG for €995,000.

They made several improvements during their time at number 4, extending out across the rear about six years ago to make a sunny seating area off the rear reception room, and a bright and spacious dining area off the kitchen. New windows, designed to copy the original design, helped raise the Ber to C3.

The front door, set back in a stepped redbrick reveal, a Stringer signature, is an attractive entrance into the home, leading into an inner porch and then into a wide hallway. The two reception rooms interconnect and both feature their original tile and timber fireplaces. The front room, like the bedroom above, has a bay window, another distinctive architectural feature in these houses.

Upstairs there are four bedrooms, three doubles and a single, and the attic has been converted into a large room used as a fifth bedroom.

The owners converted the side garage too, using it as a playroom when the children where smaller but now it’s a more grown-up space, a home office with a door opening to the front and another out to the rear.

The rear extension is designed to incorporate a covered patio area used for outdoor dining in summertime and the garden, which is not overlooked, is about 27m long.

Like many houses in the area it has a bomb shelter in the south-facing back garden. In January 1941 the Luftwaffe, lost in bad weather on the way to bomb Liverpool, dropped four bombs on Terenure – on Rathdown Park and Lavarna Grove – injuring seven people and demolishing two houses. It prompted many homeowners in the area to build shelters in their gardens, some more elaborate than others. The then resident of number 4, a civil servant, built a modest structure, now a flower bedecked garden feature.

The most recent sale on the road, also on the sunny side of the street, was number 38 Rathfarnham Park which sold for €940,000, although that house requires modernisation.

Sick of plastic packaging? There’s a shop for that
6