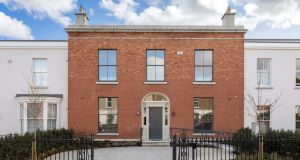 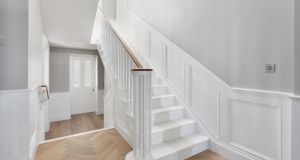 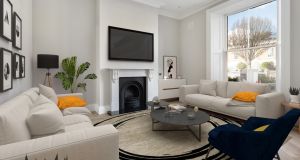 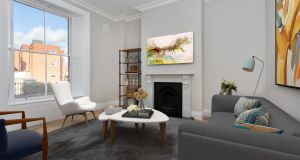 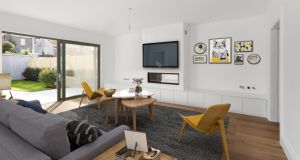 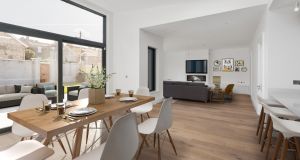 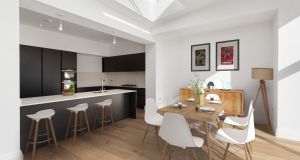 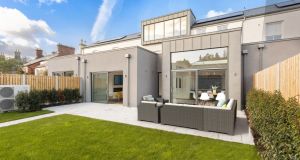 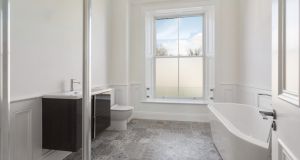 We all know that well-presented homes get more views on property portals and more footfall at open viewings. So, while physical viewings have been suspended as a result of the coronavirus outbreak, one house, 31 Leinster Road West, in Rathmines, is ahead of the curve. It is putting its best foot forward by using a new virtual staging service to catch the attention of would-be buyers.

Save for its redbrick front facade, the five-bedroom property is a brand new build constructed within the brick shell. The A2-rated house, which extends to 355sq m (3,605sq ft), is one of three built by Arklow-based Cedar Building Company whose past projects include the refurbishment of the K Club and some one-off houses around the courses.

The virtual staging of this two-storey house is a timely move, given that all open viewings have been postponed. This means that while the house itself is unfurnished, the furniture, rugs and paintings that viewers “see” have been superimposed into the images by photography company MediaPro.

“It shows the property off to its true potential,” explains MediaPro owner Ross Killeen, himself a former agent. This is the first time Sherry FitzGerald has trialled the service, which costs €200-€300 rather than the €7,000 and upwards that interiors stagers can charge to rent furniture and fixtures for a viewing period.

Sellers can choose from a suite of furniture styles and options from Scandi to classic, explains selling agent Andrea Whelan. “It’s useful to give a sense of a home as opposed to a vacant property.” She is also putting together a video so that would-be buyers can cross the threshold, at least virtually, and view the unfurnished rooms too. The property has been placed on the market seeking €1.895 million.

Features within the house include oak parquet engineered floors, laid out in a herringbone pattern, smart architraving and period-effect coving. The rooms have big proportions, including ceiling heights of 11ft at hall level and 12ft on the first floor.

The property is warmed by an air-to-water system with underfloor heating at hall level and upright radiators in all the bedrooms, which take up less linear space, explains developer Michael Holly.

There are matching marble fireplaces in the drawing room, to the left, and the sitting room across the hall. A sizeable, open-plan living/kitchen/dining area with a 10.5sq m utility is where the virtual staging works best, drawing in zones within this large, south-facing room where sliding doors lead out to the patio and garden. The space is empty save for an on-trend antracite Leicht kitchen.

The property was built on the grounds of the former Alexander Guild Home. Situated on a prominent position on Leinster Road West, close to the junction with Harold’s Cross Road and Leinster Road, the site extends to 0.125 hectares (0.31 of an acre).

Will tenants have to prove they can’t pay rent?