Grand Victorian semi comes with a valuable mews to the rear 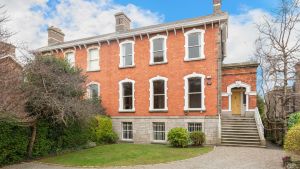 Houses on Ailesbury Road in Dublin’s embassy belt have seen many changes over the past few decades, with huge fluctuations in selling prices before and after the property boom and many undergoing massive renovations.

Now a large house that was home to one family for nearly 50 years is for sale and it’s likely that new owners will give it a major facelift. Potential buyers can view the property, for sale through Sherry FitzGerald, online in the current coronavirus crisis.

Built in 1875, number 15 was the family home of the late John Blake, a medical consultant who bought the house in the 1970s. The property had previously been the Nigerian embassy.

The five/six-bedroom house appears – from an online look at pictures of the property – to be in good, if dated, condition, with intact period details like the elaborate coving, cornicing, centre rose and original marble fireplaces in three main interconnecting reception rooms.

But new owners will almost certainly completely refurbish the house, a protected structure; that could cost at least another €1 million or more, according to agents handling sales on Ailesbury.

These rooms were their father’s consulting rooms when they were growing up in the house, explains one of the vendors, one of five children.

The house holds many happy memories for the family. There was lots of space and it was a hub of many parties and gatherings, encouraged by their late mother, who was very hospitable, says one of the owners.

Accommodation in the house consists of the three reception rooms, a two-storey extension at the end of the front hall, and a conservatory at the back of the house. There’s a relatively modern kitchen/breakfastroom and sittingroom at garden level and upstairs, five bedrooms, one en suite, and a bedroom at hall level with an en suite.

The two-bedroom mews house off the end of the back garden has separate access off a lane running behind houses at this end of Ailesbury Road. The 90ft-long back garden is mainly in lawn, bordered by mature bushes.

Agent Simon Ensor is upbeat about bringing a house like this to market in the middle of the economic uncertainty triggered by the coronavirus crisis, although he agrees it’s uncharted territory for such a sale.

There are, he says, only a limited number of buyers at the best of times for the grand houses on Ailesbury – but “there are one or two people for whom this will tick the right boxes and who will take a 10 or 15-year view that it will be worth it”.

Ailesbury Road has seen a lot of sales and major renovations over the past 15 to 20 years. Commercial property agent Pat Gunne bought 17 Ailesbury Road for €13 million at the height of the property boom in 2006.