Island View is a coastal property with direct access to the shore, situated within walking distance of Dalkey Village. Asking price: €1.575m 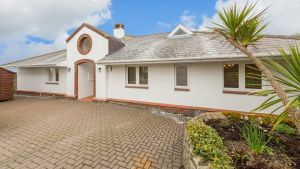 Coastal properties with direct shore access are something of a rarity in Dublin. Also known as ‘pieds dans l’eau’ (literally ‘feet in the water’) there are only a scattering of same along the Dublin coastline.

Island View, at 5 Beulah Court on Harbour Road in Dalkey, is one of a six house development constructed in the 1990s and includes five modern homes and an old gate lodge.

The lands on which they were built were once part of Beulah House next door; the stately Victorian pile which was purchased in 2017 by aviation financier Douglas Brennan – who is currently renovating the entire property.

Aptly named Island View, as there are scenic maritime vistas taking in Dalkey Island, Dublin Bay all the way across to the Howth peninsula, this four-bed house occupying 174sq m (1,873sq ft) has direct access to the water through a small pedestrian gate at the end of the garden.

The house, in turnkey condition, has an L-shaped layout – with the entrance to the side – allowing the rear of the house, which is occupied by a kitchen, dining room and large drawing room to take in the views.

The property was purchased by its current owners in 2005, but with a growing family they have moved on to a larger house in the area. It has been home to another family member for the past 18 months while renovations were carried out to their property.

Now the four bedroom house has been placed on the market through Sherry FitzGerald seeking €1.575 million.

Interiors have been staged for sale by fit-out company Hyde Interiors, who have chosen a maritime theme with the use of blues and greens throughout.

Three of the four bedrooms are doubles, with the fourth – a single – now used as a home office.

There is also room to expand the overall size of the property by converting the attic, all subject to the necessary planning regulations.

But it will be the sea at the bottom of the garden – separated by a rocky outcrop – that will attract buyers to the house, in addition to the private right of way to the harbour at Rocklands, and the fact that the house is within walking distance of Dalkey village.

While the property market finds itself in uncharted territory with the current coronavirus crisis, house viewings are by virtual tour via the auctioneer’s website.

Rosie Mulvany, the selling agent with Sherry FitzGerald, says: “There has been a marked increase to our website during the past week, and buyers are really engaging with us online. Island View lends itself perfectly to be showcased on virtual platforms, and I believe that buyers will get a true sense of this home’s attributes when they take a virtual online tour.”

Potential viewers can book a time slot with Rosie to view the property virtually and she will be on hand to answer any queries and provide further information.