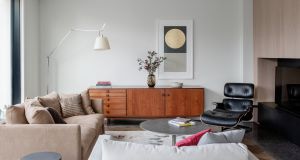 At home with Dermot Bannon: A teak sideboard with Rosewood handles designed by Ib Kofod Larsen for UK company G Plan in 1964 and supplied by The Vintage Hub – Mid-Century Online. Photograph: Ruth Maria

Barbara Behan’s London home features a striking sideboard in her diningroom – part of her extensive collection of mid-century modern furniture that is used in every room of her home.

Sideboards are particularly sought-after pieces, being good-looking and useful at the same time. When Dermot Bannon finally finished his new Drumcondra home – as featured on RTÉ in recent weeks – one of the first pieces to arrive was a a mid-century sideboard for his open-plan livingroom.

Mid-century sideboards have become something of a design classic according to Killian McNulty of the Vintage Hub, who supplied Bannon with his one. “Dermot opted for one of our larger sideboards for his new home. He was a little concerned that it might swamp the room but once it was in situ, he realised it actually made the space,” says McNulty.

So, what is the attraction of these classic pieces for today’s homeowner?

Domhnaill Ó Gairbhí of Acquired explains: “As well as being fantastic for storage and display purposes sideboards lend themselves to creating a really nice space.”

“Italian sideboards are generally large and very sleek and stylish. Often made in rosewood they can include delicate and decorative inlays. The designers we work with are always on the look-out for these pieces as a finely designed mid-century sideboard can become the central focus point of a space helping create a beautiful room around it.”

For McNulty, size matters when it comes to stylish sideboards.

“For people with smaller houses and new apartments, size is a priority which is why we stock smaller versions, under 1.6m. Their simple design can be extremely effective. They might look like a plain Jane but they really work.”

Along with providing storage space for things you don’t want to be seen – crockery, drinks cabinet, children’s toys etc – sideboards also offer a surface for the things you do want to show off. “Lamps, sculpture, artwork will all sit quite happily on your sideboard while a whole host of household essentials can also be hidden away,” says Ó Gairbhí.

McNulty, who focuses on 1960s and 1970s sideboards from the British company G Plan and the Scottish brand McIntosh, maintains they are the perfect marriage between form and function.

“The thing about mid-century sideboards is that while they are often 40 to 60 years old, they make a space look and feel very modern.”

For those in search of the perfect sideboard, McNulty’s advice is to start by engaging with your local antique shop or auction room which you can locate through Iada. com. Large auction houses such as James Adams on St Stephen’s Green and deVeres on nearby Kildare Street hold mid-century furniture auctions once or twice a year, while clearance auction rooms such as Herman & Wilkinson in Rathmines often throw up modern pieces at reasonable prices.