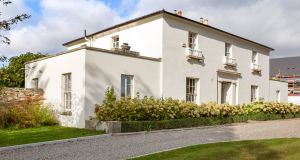 Not long after featuring in The Irish Times property supplement’s annual list of the 10 homes we fell for in 2019, East Hall, a charming Georgian estate house in Delgany, Co Wicklow has fairly swiftly found a buyer at €1.325 million.

While the figure represents a slight discount on the €1.35 million joint agents McGovern Estates and Colliers International had been guiding when they brought it to the market last October, it’s understood the vendor, D|D|RES Properties were happy enough to accept the lower price as the as the purchaser – an Irish cash buyer – was ready to proceed.

While another offer of around €1.7 million had been made for the property, the completion of that deal would have been dependent on the prospective purchaser selling their existing home first.

The Property Price Register shows that D|RES Properties paid €2.053 million in 2017 for the fine Georgian property when it acquired East Hall from its previous owner, Simon Pratt of Avoca Handweavers, but that sale also included 5 acres of grounds.

Having secured ownership of the property, D|RES subsequently purchased an additional adjoining 5-acre site which they are now developing along with four acres from the original East Hall site. Around 70 three to five-bed houses are due for completion at the newly-minted Eastmount scheme this year.

Notwithstanding the reduction in the size of its grounds, East Hall still retains a subtantial 1.2 acre garden, while the house itself, which dates originally from the 1700s, extends to a not-inconsiderable 444sq m (4,779sq ft) of accommodation over two floors. The property also has its own 60sq m (646sq ft) gate lodge, and four distinct garden areas comprising a large paddock, a Victorian fruit and vegetable garden, a secret garden, and a formal lawn to the rear of the house.

While the new owner of East Hall might be uncomfortable with the proximity and visibility of the new housing development springing up over the wall, it’s nothing that some strategic planting of mature evergreen trees won’t remedy.