Glorious conversion of a Blackrock vicarage for €2.95m 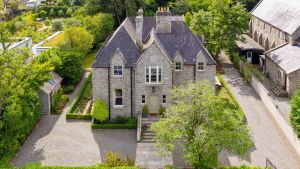 Soon after All Saints Church on the corner of Proby Square and Newtown Park in Blackrock was completed in 1870, built to cater for the growing Protestant population in the surrounding area, the question of where the vicar would live was solved when the church’s architect John McCurdy was asked back to design the vicarage.

He was one of the most popular and prolific architects of his day, a forceful voice in advocating for the professionalisation of his trade through the RIAI and designing a vast range of buildings including churches, jails, shops, schools and several houses. McCurdy was regularly asked by owners of grand estates to add Gothic touches to their plain houses, such as statement entrances or an extra wing, or even a billiard room – which he added to Shelton Abbey in Wicklow. That was through his own Dublin-based practice but he was also the official architect of Trinity College Dublin working on various buildings on the campus. Canon George Stokes, the rector who he was designing a home for was also a prominent Dublin figure, a church historian, prominent academic and vicar of Blackrock. For his builder, McCurdy in turn commissioned well-established building firm J&W Beckett, known then for its skilled craftspeople but now perhaps remembered because one of the brothers, William, was Samuel Beckett’s grandfather.

McCurdy didn’t look too far for his design inspiration for the rector’s house; it is built in the same rustic granite as the church – that is the house’s most distinctive feature – and its Victorian Gothic elements include trefoil and pointed arched windows and decorative timberwork inside in the cornices and staircase.

The current owners lived locally and when the Old Vicarage came up for sale in 2003 they jumped on it. It had retained its name but had been sold off by the church several years earlier and the large family who lived there were downsizing. And that’s what is happening again, the family now selling moved in when their three children were small but as they are now grown up the couple are moving on from this substantial three-storey, five bedroom 390sq m (4,200sq ft) detached home.

After they bought they lived there for a few months to get a feel for the house and then embarked on an 18-month renovation project commissioning architect Tony Mullen to rework the property to suit a busy, growing family.

An extension wasn’t required – there’s enough space already – but a key thing he did was dig out the part of garden directly around the ground floor, installing terraced beds, and removing several tonnes of earth to create a large patio space outside the back door. It means the rooms on this level are significantly brighter than McCurdy’s original idea when this floor would have been for the servants. Now it includes an open-plan large eat-in kitchen (country-style, timber units topped with granite and an Aga), a breakfast area and comfortable living room and is the part of the house most used by the family. Also at this level is a boot room, shower room and utility (a laundry chute goes from the top of the house into it). There is access from the front off the house – there’s a door under the flight of granite steps leading up to the front door – and also from the side and rear.

A feature of this house is the many rooms that are dual aspect – and at hall level there are three spacious reception rooms, the front used as a home office. A service kitchen is used by the owners when entertaining and also on this floor is the fifth, smallest bedroom, used in previous years as au pair accommodation.

The four bedrooms at the top of the house are doubles, the larger one has both a walk-in wardrobe and a roomy ensuite. There are two bathrooms on this level, one with a bath, the other a shower.

The Old Vicarage stands on nearly half an acre – in Victorian times the grounds included a croquet lawn and a tennis court. Now as well as mature shrubs, trees and lawn, it has two new structures, both built by the current owners, in rustic granite to match the house, one a boiler room to the side, the other a pitched roof garage at the end of the garden. New owners, depending on their requirements, might consider converting this into self-contained accommodation for a relative or au pair or perhaps a studio or home office.

There is parking to the front for several cars behind electric gates. For buyers, probably a young family trading up, looking in this upper end of the market – The Old Vicarage is asking €2.95 million through Lisney – will find a large family house, full of character and carefully retained original features, in walk-in condition and one with an interesting history.

Election 2020 in commuterville: ‘They built the houses and left the people in a vacuum’
10