Classic charmer on the Luas line in leafiest Rathmines for €4.75m 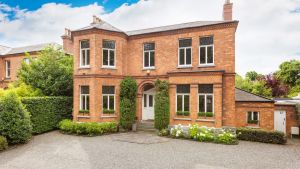 Cowper Road is one of Dublin 6’s lovelier roads, in particular that part which connects Palmerston Road to the Green Line Luas stop where the Mageough, a pretty collection of small redbrick homes, first built for elderly ladies, occupies a vast area of the north side of the road.

Across the street, on the sunny south side is number 44, Norwood, a fine detached Victorian redbrick with charming features that has had just six occupants since it was built in 1893.

The current owners have lived here for 35 years and have made this a lovely atmospheric family home from the moment you enter the large railed garden with beech hedging to the front.

A quarry tiled porch and a glazed hall door with striking wrought iron detail opens into the large entrance hall. Once inside there is a real sense of decades of family life lived within these sizeable rooms. A sweeping mahogany staircase showcases the notable ceiling heights, while to the left are two fine interconnecting reception rooms. The original internal doors retain their bakelite knobs and Victorian keys.

The wide drawing room to the front features a bay window with a trio of cathedral glass-topped panels, inward-opening casements below, all swathed in luxurious swag curtains. Both rooms have fine marble fireplaces with slate and brass insets with the sitting room to the rear boasting very smart bespoke bookshelves rising to picture rail level. French doors lead out to a small rear patio with steps down to the sizeable south-facing garden which extends to more than 35m and is about 19m wide. The property itself sits on about a third of an acre.

Off the dining room, steps to the side lead through to a large butler’s pantry. This in turn leads through, via a sizeable utility, to the kitchen but the main route is via a set of steps to the back of the hall.

At this lower level, there is a tiled shower room to the left where the owner used to bathe the children, drying them with towels heated in the four-door Aga, one of the focal points of the kitchen.

The kitchen is a very homely space with fine solid oak units that include curved corner cabinets and solid oak counters. These were installed decades ago and, while back in fashion, will probably divide opinion.

Modernists will scream 1980s redux while conservationists will consider stripping the timber and oiling it to bring the grain back to life. The owner has already added a contemporary element with open shelving above the counters.

Those who relish a modern kitchen with stone countertops will likely think of extending out into the garden and there is plenty scope to do so but the current layout, starting from the dining room via the side of the house with some clever design could be upgraded and work as a modern kitchen/dining/living room. The only addition by the current owners is a small bow window in the kitchen.

The property already extends to 336sq m (3,617sq ft) with three-quarters of the property set over two floors and the right-hand side extending up another return. A library on the hall return, a lovely square room with built-in bookshelves overlooking the garden, could also be used as a fifth bedroom. Adjacent to it is a small office. It’s a valuable private space for anyone planning to work remotely.

On the first floor, there are three big bedrooms with the landing lit from above by a pair of roof lights. The master bedroom makes a lovely oasis – even if the current brown furniture isn’t your cup of tea. It extends to 34sq m – the size of some one-bed apartments – and enjoys the same bay window vista as the drawing room below. The view is out to blossoming trees on the street and the green space of the residential care home.

The en-suite bathroom is in what would have originally been a dressing room. This is a big space with twin sinks, a separate shower and double-ended bath. It can also be accessed from the landing.

On the first floor return there is another double bedroom with a bathroom adjacent. There are mountain views from all the rear bedroom windows.

The garden is a luxury in itself. Bounded by mature brick walls it was discreetly landscaped by Iain and Frances MacDonald in 1986. The lawn is a bit mossy but wouldn’t take much to get in shape. The property is seeking €4.75 million through agent Sherry FitzGerald.