Hugh Wallace: ‘Our farmhouses need saving, not the cities’

Where the Heart Is: Old farm buildings could help solve the housing crisis 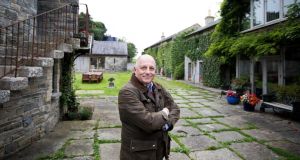 “We’re obsessed in Ireland with trying to save our cities and our urban heritage, which is absurd, really, as Ireland’s heritage is predominantly steeped in farming,” says Hugh Wallace, architect, judge on RTÉ’s Home of the Year and presenter of The Great House Revival. “It’s our countryside that needs saving, not the cities.”

As Wallace grew up on a farm in Kilcoole, Co Wicklow, country living is a subject close to his heart. He recounts fond memories of smoked ham hacked straight from one of the joints that his aunt had stowed up the chimney, and of his weekly bath on a Saturday, which he took only after his four cousins had had their turns first.

I saw a stunning site for sale in Thurles last week, with gorgeous old farm buildings, ripe for renovation, and the asking price was only €45,000

Wallace is passionate about encouraging this generation to rescue the many derelict farmhouses around Ireland before they rot. “We’ve all these young people busting a gut trying to pay mortgages and rent small houses near the city, but they need to be encouraged to look to the fields. There are steals to be had in the countryside, and so many abandoned old farm buildings which can be transformed into the most beautiful living spaces.

“I saw a stunning site for sale in Thurles last week, with gorgeous old farm buildings, ripe for renovation, and the asking price was only €45,000. Nowadays, with so many remote-working opportunities and the likes of Airbnb, it’s becoming more viable to live in the countryside and make an income without relying on agriculture.”

Investing in an old farmhouse can be hit and miss, as they were mostly built from rubble, with no foundations – but the outbuildings can be the diamonds in the rough, he says.

“Back in the 1850s the government started issuing large grants to farmers to expand their businesses by adding barns, milking parlours, stables and even schoolhouses. In order to be eligible for the grant, however, they had to build to strict specifications, including proper foundations and walls made from cut granite.”

As a result lots of really solid structures sprang up around farmyards in the second half of the 19th century. Over time their uses changed, but what’s left behind, according to Wallace, “is a beautiful, strong stone shell, with cavernous spaces on the inside. In other words, the perfect canvas for a modern renovation.”

Wallace has been working on one such project for a decade on a farm outside Enfield, in Co Meath. The result makes a convincing argument for overhauling outhouses. When his client bought the farmland, the derelict outbuildings were almost thrown in for free. Slowly, over the years, Wallace and his team transformed the quadrangle of work buildings into a stunning modern home. The long building that once served as a hay barn, at one end, and a machinery shed, at the other, is now the main house, with five bedrooms. The pigsty is now a gym; the cowshed houses an office, a playroom and a pool table; and the old schoolroom and schoolmistress’s accommodation have been turned into a two-bedroom guest cottage. “Only the duck pond has retained its original purpose,” says Wallace.

‘Roll up your sleeves’

Wallace estimates it can cost anywhere between €100 and €250 per square foot – that’s between at least €1,000 and €2,500 per square metre – to turn an outbuilding into a modern house, and that includes underfloor heating (a must in outbuildings, says Wallace), new windows and roof, and efficient, ecofriendly services. The biggest cost is actually preparing the site. “If you can roll up your sleeves and muck in, and gut the building and site yourself, you can save a fortune by just handing a shell over to the builders,” Wallace says.

He also suggests a visit to the local conservation office, to find out about the building’s history and many purposes. It might also have examples of similar modernisation projects.

“I’d advise keeping the original shell as is and working with the windows and door shapes in situ. Then what you often see is most of the rear wall gets demolished and a big glazed extension is added, which lets in lots of light and merges the old and new. But each building is unique, and you have to listen to the house. The walls will talk to you. Have you ever noticed when you encounter old stonework, you instinctively reach out to touch it? That’s the house reeling you in. You never put your hand out to touch plaster render on a modern house, do you?”

We salvaged so much from redundant materials found around the farm – slate tiles, pitch-pine floors, granite plinths

Wallace has also found that many of the materials needed for these refurbishments can be found on site. “On the Enfield project we salvaged so much from redundant materials found around the farm – slate tiles, pitch-pine floors, granite plinths. They were all just lying there, so any material that could be repurposed found a new home. This adds massively to the charm and character of the finished product, as well as saving money.

“Most of us are only one generation removed from the farm, and when you look at our current housing crisis, and pressures on cities, a big part of the solution is right there in our lovely green fields. These old buildings want to be loved. We just need to send the people their way.”

Hugh Wallace will be at the FBD tent at the National Ploughing Championships on Thursday, September 20th, at 11am, 1pm and 3pm, discussing the best way to approach farmhouse and farm-building restoration

Tesla’s next-gen Model X: A frustrating €95k drive – but everyone else will love it
2

Moving out of home is wonderful ... until you realise takeaways are expensive
10