Eight things you should know before seeking a mortgage 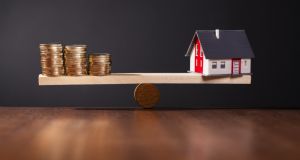 Referral charges, overdrafts, car loans, unnecessary credit card charges, direct debits to a gambling account; all of these can mitigate your chances of getting either approval, or approval for the amount you desire.

Getting a mortgage has never been particularly easy; these days however, a combination of soaring property prices and stringent Central Bank lending rules have conspired to make it particularly challenging.

Indeed while the numbers seeking mortgage approval continues to rise, the numbers actually managing to go ahead and purchase and draw down their loans is growing at a snail’s pace. In the year to July for example, latest figures show that mortgage lending actually grew by less than 1 per cent.

Wise up to the Central Bank’s rules

If you’re buying a home for the first time, or are looking to trade up and it’s been a while since you last purchased, take some time to read up on the Central Bank’s rules. These now govern how much banks can lend, and how much you can borrow. After all, there’s no point in turning up at a broker/bank looking for a mortgage if your budget is unrealistic. Under the rules, borrowers can only borrow 3.5 times their (combined) income, while first-time buyers need a deposit of 10 per cent and trader-uppers 20 per cent. This means for example, the average annual wage of about €38,000 will get a mortgage of about €133,000, or €266,000 for double that salary. To look at it another way, if you want to buy a house worth €400,000, you’ll need an income of about €102,000 if you’re a first-time buyer, or about €91,500 if you’re trading up (as the deposit required is bigger).

Don’t bank on an exemption – this year

Of course there are exemptions to these rules; but as the year-end approaches, you’ll find that many lenders have already underwritten all the exemptions available to them this year. This means that you’ll either have to abide by the limits, or wait until the new year when a fresh round of exemptions might come around.

If you secure an exemption, you’ll be able to borrow up to about 4.5 times your income (this exemption applies to 20 per cent of new residential lending), or have a deposit of less than 10/20 per cent, depending on whether you’re a first-time buyer (FTB) or not (5 per cent of these go to FTBs and 20 per cent to subsequent buyers).

Typically banks will offer one or the other, and they are also tough to get, with banks cherry-picking the safest bets, with plenty of extra income.

Central Bank figures show that in the first six months of 2017, FTBs with an exemption on the income multiple had an average LTI (loan to income) ratio of 3.9 – compared to a multiple of 2.8 for FTBs who didn’t get one.

It’s one of the first things that banks look at, so before you even pick up the phone to arrange an appointment, take some steps to get it into shape.

Referral charges, overdrafts, car loans, unnecessary credit card charges, direct debits to a gambling account; all of these can mitigate your chances of getting either approval, or approval for the amount you desire.

And remember, if you have a personal loan, such as for a car or college fees, it will impact on how much you can borrow so try and reduce if you can before applying.

If you’re buying a new build, factor in Help to Buy

Help to Buy, which gives a tax rebate of 5 per cent of the purchase price on a property to first time buyers, can help shorten the gap between your savings and a 10-20 per cent down payment. It is restricted both to first-time buyers (FTBs) and new-builds, however, which may not suit everyone.

Provided that youqualify for the rebate you could buy a new property with as little as a 5 per cent deposit, depending on whether or not you’re a first-time buyer, or get an exemption.

This means for example, that a house on the market at €295,000, can be bought with a deposit of as little as €14,750, as Revenue will pay the rebate directly to the developer.

While some have criticised the incentive as simply driving up prices, the evidence remains mixed. Figures from Sherry Fitzgerald for example show that new house prices fell by 3 per cent in 2017 – but then again, this could have been driven by the type of houses sold that year, rather than real price drops.

But the incentive can undoubtedly help people who otherwise wouldn’t be able to save up the requisite deposit to qualify for a mortgage. In the first quarter of this year for example, figures from the Banking & Payments Federation of Ireland (BPFI) show that FTBs around the country need a typical deposit of €37,000, or more than €55,000 to get on the housing ladder in Dublin.

Remember, the incentive is due to expire on December 31st, 2019, but may be extended further – listen out on Budget day, October 9th, for any updates.

With prices on a seemingly never-ending upwards trajectory, you might find that an original mortgage application won’t be enough to allow you to close a deal. Banks typically grant an approval in principle for a period of six months (although AIB offers 12 months), but if you don’t secure a property within this time you might need to reapply – and you may need to reapply for more.

Nationally, house prices rose by about €21,000 in the 12 months to June, while the cost of an average property in Dún Laoghaire Rathdown soared by €47,000 in the same period.

Mortgages can come to you

Banks may be embracing digital services in their branches across the country, but they are increasingly sending their advisors out on the road – which can work well for time-strapped would-be home buyers.

Bank of Ireland for example, says that its mobile sales force are on track to deliver about 25 per cent of the bank’s new mortgage business this year, indicating the growth behind this new channel. Some of these mobile mortgage managers are now holding meetings on-site in companies around the country, including Bank of Ireland and RSA, while others will arrange to meet you at a time and place that’s convenient to you – even on evenings and weekends.

Yes, we might live in the age of the “gig economy”, but lenders still typically adopt an old-fashioned approach when it comes to lending money. And this means they ideally want you in a permanent, pensionable job for more than one year at least .

So if you’re a public sector work, or a professional such as an accountant or solicitor, you’ll tick the box. If however, you have a “portfolio” career, or are self-employed, you may need to show accounts for a number of years to win over the bank’s approval.

Buying from abroad is still tricky

If you’re working abroad but hoping to still buy in Ireland, prepare for the process to be that bit trickier. Banks may not want to lend to you if your earnings are in a different currency to euro, while if they do, they will want a substantial deposit.