Gardening: It's always a pleasure to return to the joy of propagation

Fionnuala Fallon: Watching a plant spring to life from a seedling or cutting is utterly magical 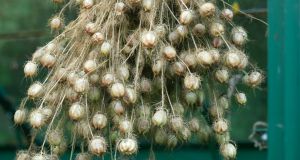 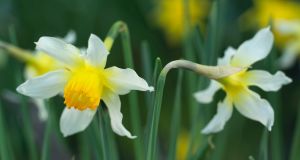 You can have daffodils flowering in your garden from February right through to May. Photograph: Richard Johnston

What first got you hooked on gardening? The flowers? The home-grown food? The pleasure of escaping from the hustle and bustle of modern life? For the childhood me, it was the magic of propagating new plants from nothing more than a handful of cuttings or a sprinkle of home-saved seed. Intrigued by my success in conjuring new life into existence, I felt like the sorcerer’s apprentice. One moment nothing, the next there were pots filled with tiny newborn seedlings and freshly-rooted plants.

Decades later, I still feel the very same way about plant propagation, which is why my coat pockets are always full of ripe seedpods, my windowsills with baby cuttings. Because what’s not to like? Not only does it result in oodles of plants for just the price of a bag of seed compost, but you also get to grow the kinds of covetable plants that grow in friends’ gardens but are nigh-on impossible to find in your local garden centre. Historic varieties no longer widely available, for example, or only newly-introduced into cultivation, or that come with a powerful emotional or historical connection.

One particularly poignant example is the young sessile oak tree (Quercus petraea) that will be formally planted in the gardens of Kilmacurragh in Wicklow this coming November to commemorate the centenary of Armistice Day and the generation of talented Irish gardeners, horticulturists and plant collectors lost on the battlefields of Europe during the first World War. This sapling oak first came to Kilmacurragh’s head gardener Seamus O’Brien as the seedling of a tree that grows in the gardens of Tullynally Castle in Westmeath. In turn, Tullynally’s owner, Thomas Pakenham, propagated his tree from an acorn he collected in Kew Gardens in London some years ago. And that Kew Gardens oak tree? It was grown from an acorn collected on the bloody battlefields of Verdun in north-east France in the autumn of 1916 by an unnamed soldier, proving the enduring magic that comes from a love of gardening.

History aside, there are many other kinds of benefits to propagating some of your own plants. If grown from a cutting or from division, for example, they will be genetically identical to the parent plant, allowing you to preserve all the desirable traits of the latter. Alternatively, if you’re propagating them from home-saved seed, then you’re helping to preserve genetic biodiversity. You may even – the thrill – end up with a distinctly new variety, a chance offspring that turns out to be quite different from its mother plant.

Sometimes you don’t even need to save and sow the seed of a favourite plant, because nature has already done it for you. It’s why I always make a habit of searching around the skirts of border plants, on the hunt for self-sown seedlings that can be gently dug-up and transplanted elsewhere in the garden or potted on to give to friends.

At this time of year, you can expect to find the plentiful offspring of hordes of different species including baby foxgloves, sweet rocket, knautia, euphorbia, stipa, aquilegia, marigolds, matricaria, astrantia, honesty, verbena, cerinthe and hellebores, making it an enjoyable botanical treasure hunt that almost always ends in a pot of gold.

Autumn is also an excellent time of year to gather ripe seed from woodlands and borders (examples include seed of oak, beech, magnolia, camellia, dahlia, astrantia, sweet William, veronica, linaria, verbena, delphinium, sweet pea, nigella, ammi, calendula, tagetes and orlaya) as well as from the kitchen garden or allotment (examples include the seed of tomatoes, broad beans, French beans, chillies, peas, peppers, dill, coriander). As long as (a) it’s not a modern hybrid with F1 or F2 after its varietal name or (b) not growing close to another variety of the same genus, it should come true. Just make sure to harvest it when the seed is properly ripe, ideally on a dry, still day and into small paper bags or envelopes, ideally labelled to avoid later confusion. Signs of ripeness include dried/shrivelled seedpods and dark-coloured, hard seeds that come away easily in the hand.

Seed aside, many perennials can also be propagated at this time of year by lifting and then replanting or potting on sections/ divisions of mature/ established clumps, especially fleshy-rooted kinds such as peonies, oriental poppies and Siberian irises.

Finally, mid-September is also a great time to take cuttings of many different kinds of tender perennials and shrubby plants (examples include varieties of salvia, penstemon, fuchsia, osteospermum, diascia, arctotis, pelargonium, plectranthus, rosemary, sage, lavender, box, escallonia, holly, viburnum, hydrangea, hebe, camellia, ceanothus, cistus and choisya.). Stripped of their lower leaves, quickly placed into a pot filled with compost lightened with horticultural grit, labelled and then covered with a clear plastic bag or lid, they will typically ‘strike’ in a matter of weeks, especially if given some gentle heat in the form of an electric propagator.

Just watch out for new growth, a sign that they’ve succeeded in doing so and are ready to be potted on. If in any doubt, then very gently tip them out of their pot and look for their newly formed, baby root systems beginning to push their way through the compost. And if that’s not an utterly magical sight, then I don’t know what is . . .

Herbaceous perennials will soon start to die back down to ground level with the arrival of autumn, making it difficult to identify or even locate them. To avoid accidentally damaging their hidden root systems over the coming months while you’re busily planting spring-flowering bulbs or tidying up borders, stick a small plant label discreetly into each clump, giving the plant’s name (or failing that, a brief description) and marking its position. For the same reason, now is a good time to label any newly purchased or home-propagated potted herbaceous plants that you’ve yet to put in the ground which could otherwise be forgotten. The same goes for dahlias, which are notorious for getting mixed up as a result of poor labelling.

The damp, mild weather of recent weeks has resulted in an explosion of fresh new weed growth in gardens, which will need to be tackled soon before the plants begin to establish sturdy root systems and start setting seed. While it might seem like the easiest and quickest solution, try to avoid using environmentally harmful weedkillers such as RoundUp. Instead, focus on the use of organically-acceptable methods of weed-control, which include hoeing (look out for the oscillating or stirrup hoe, which will slice through young weeds with ease), hand-weeding, green manures, mulching and flame-weeding (available from Cork-based fruithillfarm.com).

Unlike tulips that are best planted later in the autumn, daffodils (Narcissus) need to get their toes in the soil by the end of September if they are to flower well next spring. Plant the fleshy bulbs at a depth of three times their height (pointy end up), roughly 10cm apart and (if in the ground rather than pots) in gentle drifts, into a fertile, moist, free-draining soil that hasn’t been freshly manured. Daffodils won’t flower well in deep shade so make sure to give them a spot in either full sun or light shade. Bear in mind that the flowering period varies greatly according to the particular variety, so you can have daffodils flowering in your garden from February (examples include Narcissus ‘February Gold’) right through to May (examples include the graceful, fragrant pheasant’s eye daffodil properly known as Narcissus poeticus var. recurvus. Daffodil bulbs are available from most good Irish garden centres as well as from online stockists including mrmiddleton.com

September 22nd (10.30am-4.30pm): Kilbride Manor, Manor Kilbride, Blessington, Co Wicklow, ‘How to Grow Your Own Cut-Flowers Seasonally and Sustainably’, a one-day workshop with flower farmer Fionnuala Fallon including a tour of her flower farm, €150 including lunch/refreshments at the manor, email theirishflowerfarmer@gmail.com for details.