‘I cherish the topsoil that feeds our family’

Despite having the stoniest soil in Wicklow, it still gives us lots of vegetables in summer 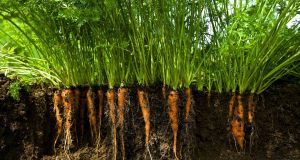 ‘We compare and contrast topsoils: whose is more alkaline and good for cabbages or whose is sandiest and best for carrots.’ Photograph: Getty Images

“Putting down roots”, being “grounded”, one’s “native clay”, and, for generations of emigre Irish, memories of the “ould sod” – it’s remarkable how many metaphors for home are connected to the soil. It makes sense: for most of humanity’s history, that mixture of clay, decayed organic matter and rock fragments has been the primary determining factor in our inhabited environment.

Even today, when more than half the global population has left it behind to live in cities, the topsoil is still responsible for producing 95 per cent of our food.

And it’s under threat. Intensive tilling over vast areas, lack of cover crops and the application of industrial quantities of harsh pesticides have combined to erode the quality and challenge the sustainability of topsoil worldwide. Ideally, we need a worldwide response: an international commitment to nurture and cherish that thin layer – five to 10 inches deep usually – that supports us all.

The small patch of topsoil in my vegetable garden helps feeds my family in the abundant months and I do my best to cherish it. Unfortunately, it mostly makes me curse and weep. I have the stoniest soil in Wicklow.

Every year I dig it over and every year sharp pebbles, shards of schist and rocks rise remorselessly. I clear what I can but in mysterious defiance of gravity, more work their way to the surface. It’s never-ending. Like Sisyphus endlessly pushing his boulder uphill, I imagine myself in an obscure horticultural corner of Hades, perpetually denting my trowel and blunting my fingers in the implacable earth.

I plant stuff. It grows. I pick it and feed my family. This is deeply satisfying

The weeding is also eternal. I have four plots in the vegetable garden, which I use in rotation, leaving one fallow each year to give the soil a rest. I also dig in compost and manure regularly to keep nutrient levels up. The weeds give not a fig for all this. In fertile ground or barren earth, they thrive wherever and whenever.

I was away for much of the first half of this year. Unwanted growth was rife in my absence. The dandelions, docks and thistles had been on a three-month binge and a gargantuan task faced me on my return. My spirit quailed as though I’d just alighted from Charon’s ferry but I got stuck in. And I felt I was home. I bribed my younger son to weed alongside me. His presence was companionable though his assistance was ineffectual.

But something about being on my knees in the familiar earth fundamentally reconnected me to where I live. My recent tour across America was suddenly and absolutely in the unrecoverable past and quite definitely “over there”. Now I was back and completely “here”.

Connection to the soil

Of course, this sense of connection to the soil is not merely a tactile relationship or some baselessly romantic, quasi-spiritual notion. There is an underlying pragmatic purpose which, for me, has largely been the sowing and reaping of vegetables. I plant stuff. It grows. I pick it and feed my family. This is deeply satisfying.

After the late August glut, I make piccalilli. This increases the satisfaction – except for when I enter a jar in the county show and fail to win a rosette. City friends happily accept a jar. Some have even been inspired to plant things themselves. A cousin has a grow-bag of spuds on her patio. A pal has a tomato plant on his balcony. And one couple have turned over part of their back garden to raised beds, bean canes and fruit bushes. Now we compare and contrast topsoils: whose is more alkaline and good for cabbages or whose is sandiest and best for carrots.

Sowing a long-lived species is an act of optimism

Meanwhile, the digging, planting, weeding and harvesting makes me aware of time unfolding at different rates. In the kitchen garden’s annually repeating cycle, I sense the slow circuit of the seasons. This summer, I will be often in the city, which could be advantageous for the vegetables. When home, my need to reconnect might focus due diligence with the weeds which, in my absence, will surely regroup for another campaign of attrition, slowly eroding tranquillity of mind till I get back on my knees in the stony soil.

Or maybe I will lie in the hammock and let time pass watching the summer shadows lengthen while the peas, beans, potatoes and courgettes swell.

In the orchard, time is marked on a longer count. The separate crops of plums, apples and pears come in waves and seem to vary in roughly three yearly patterns. And, a decade on, we are still waiting for cherries. Three years ago, our sons planted an oak and a horse chestnut. These will be measured by lifetimes and I will not live to see them flourish.

Sowing a long-lived species is an act of optimism, suggesting confidence in a stable future. The larger the tree: the wider the root system which better protects the soil from erosion. Uncertainty currently seems to stalk the planet but two more oaks in clay pots flank our front door. We should plant them.