Van power: why more people are putting a home on wheels 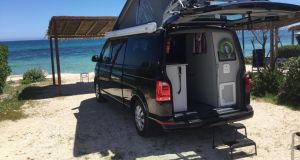 A converted van from Cosy Camper

There is a whole genre of film and literature given over to the idea of heading onto the road and letting adventure take you on a journey of discovery.

But in Ireland, where there’s a seemingly ever-present likelihood of enduring four seasons in one day, that fantasy of bedding down in a tent wherever you fancy can be a rather soggy reality.

The alternative is a motorhome, or recreational vehicles, RVs as retirees call them in the US, These are big and boast every manner of creature comfort but are also pricey. But there is a less expensive and leaner way of bedding down, says Joe McLoughlin of Cosy Campers: an affordable home away from home, often behind the plain looks of a commercial van.

His firm is one of several home-grown micro companies specialising in converting a panel or commercial-style van into a multi-tasking vehicle that can transport the kids to and from school, fit the weekly shop and then, on the weekend or on a fine day, lure you out of the city and on an adventure, one that allows you to stop wherever you fancy, bed down and wake up to the wowza views.

He and his now wife discovered the lifestyle early in their relationship: in 2013 they did an eight-month road trip around Australia in a VW Camper – the van style that changed the world when it launched in 1950.

“It’s to do with freedom and versatility,” says McLoughlin. “You can go anywhere the road will take you. If you want to go surf you can go park by the beach.”

There are downsides. Living in such a small space really tests a relationship, he says.

“If it doesn’t work out it can be hell on wheels but you don’t know till you try it. If you’re too regimented it’s not going to work.”

These commercial van conversions are being used by people as their second vehicle and as that they get far more use out of it for day trips and overnight stays than the once a year trip to the continent in the more formal forms, says Brian Lacey of Wexford-based Happy Campers.

“It’s about getting out into the great Irish outdoors but not having to deal with the soggy clothes that come from hiking in the rain. And if the kids get grumpy you have a warm, dry space for them to escape the elements, tuck into some food and/or take a snooze.”

It is, he says, the ultimate in self-sufficiency. Necessities in his own vehicle include dry foods, tea, coffee, condiments, baby wipes, toilet paper as well as chairs and a table and a barbecue “so that all we have to do is drop into the butchers for a few chicken breasts and a bottle of wine. When you’ve had enough you can come back when you please.”

His clients bring their own vans to him to convert. A basic model that can sleep two costs €9,995 to convert, while prices for one with an elevating roof that can sleep up to four start from €15,995.

McLoughlin’s Cosy Campers sells the van plus its conversion as a package. The company offers a good degree of customisation on seating, floorings and kitchens. Costs range upwards from about €42,000 for a 4.9m long vehicle. A fully converted blue Transporter will cost about €53,000.

Facilities may or may not include a toilet. This is something retirees insist on but families often opt for a portapotty, something that small kids can use in the middle of the night as oftentimes they will park at campsites where there will be shower and toilet facilities.

Water containers can be installed to supply the sink and toilet, with larger tanks stored under the body of the car, where you can fit up to 50 litres of potable drinking water and a further 50 litres of waste water.

Every vehicle is different and customers will be involved in the design and build process from the get-go, figuring out whether they want an oven or plan to cook outdoors and if they want a fridge that will require additional space for its cooling mechanism.

A solar panel on the roof, for instance, will charge the leisure battery to run the fridge, the water pump, interior lights and even your mobile phone but it won’t heat the water for a shower, for example.

Most vans are fitted with awnings that gives additional outside space.

Try before you buy

Elevations to the rear will allow you to accommodate more people – you can put a double bed up there while a swing rear door gives you shade if travelling to sunny climes.

In Ireland most people use it to stay out of the rain, especially when changing out of wetsuits and so on. The van will take between 20 and 26 weeks to convert so if you fancy trying it this summer you might be better hiring one for a couple of days first to try before you buy.

In Canada, Paved to Pines is an up-and-coming company specialising in the conversion of another type of commercial vehicle: old school buses or skoolies as they are known.

Paved to Pines was set up by two college pals, Mitchell Rosko and Steven Glass, about two years ago. You can rent or buy their buses and ambulances. In a social media-mad world, part of their appeal is that they’re photogenic.

“You get a lot of looks passing other vehicles on the highway and you see people getting their phones out,” Mitchell says.

Clients include an accountant trading down to customers finding it hard to get on the bricks and mortar property ladder.

“In Prince Albert, where the firm is based, and surrounded by dense forests people want to get out into nature and unplug. When they get smartphone withdrawal symptoms they can go to a camp ground.”

There’s a TV show in the making and they’re taking their vehicles on the road and onto the festival circuit to get the word out.