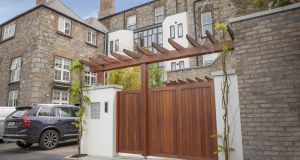 The entrance to the co-living space is to the rear of the former Bird's Nest orphanage.

A former Dún Laoghaire orphanage which was known locally as “The Bird’s Nest” is now being offered to the rental market as Dublin’s latest “luxury co-living” experience.

The imposing granite-fronted property at 19 to 20 York Road was originally opened as an orphanage in about 1859 by a Mrs Smyly. The building was later operated by the Smyly Trust, and until its eventual closure in 1977 it was home at any one time to an average of 180 children ranging in age from five to 12, including at one stage former Irish football international Paul McGrath. The orphanage trained girls for domestic service while boys were typically moved on to other institutions in and around the capital.

Today, the central portion of the original property is being marketed by letting agent Brady & McCarthy as “The Orphanage, a luxury co-living residence”comprising four fully-furnished private suites and living rooms, indoor and outdoor shared spaces aimed towards “corporate clients who want to provide an inclusive living experience for their staff”.

The website for the Orphanage meanwhile promises its prospective residents “beautiful shared spaces to enjoy together” and “spacious private suites in a welcoming home”.

While the owner of the Orphanage was unwilling to speak directly to The Irish Times in relation to their choice of name for the scheme, a spokesperson said it reflected “the history that was there”. “When you are there, it will become your adopted home,” the spokesperson added.

The four one-bed suites in co-living scheme are being made available at rents of between €1,200 and €1,500 per month. According to the letting agent, the suites has been “individually designed, fitted and furnished to a five-star hotel standard”.

While the original “Bird’s Nest” orphanage enjoyed a relatively benign reputation when compared to some other childrens’ institutions, there are, unsurprisingly, former residents with unhappy memories of their time there.

In more recent years, the former York Road institution became embroiled in controversy over its involvement in clinical trials for vaccines carried out on babies and children in orphanages in the 1960s and 1970s.

It was one of several institutions including the Bessboro Home, St Patrick’s Home, Navan Road, Dublin, and the Cottage Home, also in Dún Laoghaire, where in the 1960s, clinical trials compared a 3-in-1 vaccine for diphtheria, tetanus and pertussis and separate polio immunisation to a 4-in-1 vaccine for the illnesses. The studies in the 1970s looked at two different types of 3-in-1 vaccines.

Independent senator and former chairman of an organisation called Past Residents of Smyly Homes and Cottage Homes, Victor Boyhan, has led repeated calls for the drugs trials to be subject to an inquiry by an Oireachtas committee. Senator Boyhan was a resident of the “Bird’s Nest” during his childhood. The former Irish football international Paul McGrath also lived there during his formative years. Efforts to contact Mr Boyhan for comment on the use of the former orphanage for co-living, and the suitability of the Orphanage name were unsuccessful.

The concept of co-living development in Dún Laoghairehas became the focus of public scrutiny recently following a planning application by developer Richard Barrett’s Bartra Capital for a 208-unit scheme on the site of the former CBS Christian Brother’s school at Eblana Avenue. The proposal includes a provision for communal kitchen facilities, which would be shared by up to 42 residents.