Make a monastic move: Glendalough cottage by the round tower for €475k 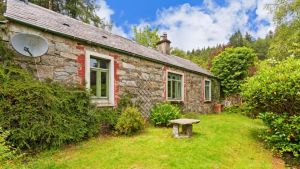 A former miner’s cottage overlooking the round tower in Glendalough, Co Wicklow, is for sale for the first time in more than 100 years.

Cloneen Cottage is just metres from the tower, which was built by monks from St Kevin’s monastery, and within Wicklow Mountains National Park, a magnet for tourists and walkers all year round.

The three-bedroom cottage stands on 0.75ac of grounds that include a secluded garden and parking for at least six cars. It’s for sale at €475,000 through Crawford’s.

Cloneen Cottage is being sold by Graham Wynne, whose family made their fortune in mining in Germany and who at one time owned a 2,000ac estate in Glendalough. The family also owned Tigroney House, about 20km away in Avoca, and it was here that Wynne’s great-aunts, Emily, Winifred and Veronica Wynne, established Avoca Handweavers, which was later transformed into the highly successful Avoca chain of food and lifestyle shops.

Wynne’s grandfather JB Wynne was gifted the Glendalough estate in 1914; Cloneen Cottage is thought to have come into his possession a short time afterwards. At one time the estate included several houses, but, according to Wynne, “as we ran out of money the houses got sold for groceries”. However, a large house close to Cloneen, currently rented out, is still in family ownership.

Wynne, who is 67 and divides his time between Ireland and Canada, says Cloneen would make a fantastic bolt-hole for walking enthusiasts or for someone looking for a unique location for a home and business, such as a cafe or holiday rentals. Nearby, Luganure, a former schoolhouse that was also once part of the Wynne estate, is listed on Airbnb for up to €360 a night.

Glendalough attracts more than 660,000 visitors a year to the early Christian monastic settlement founded by St Kevin in the sixth century, and to the walks through the park that vary from a half-hour stroll to the full four-hour circuit of the lakes.

Cloneen Cottage is a sturdy cut-stone home of about 105 sq m (1,130sq ft) with timber and quarry-tile flooring throughout, plus central heating and wood-burning stoves.