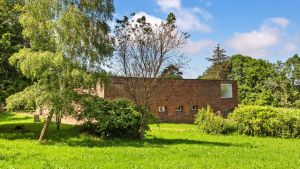 Set on 3.5ac of land on the southwestern fringes of Dublin, Bauhaus, at 16 Stocking Lane in Rathfarnham, is one of a kind. The fortress-like home, which was originally named Newhouse, was designed in the early 1960s by the husband-and-wife architectural team of Joachim and Margot Schürmann for Joachim’s brother and sister-in-law, the sculptors Werner Schürmann and Gerda Froemel.

The house also channels a far earlier form of architecture: the domus, or atrium house, of ancient Rome, which was designed to look inwards. The property’s rooms are set around a courtyard that is itself framed by an open colonnade of timber telegraph poles set on stone pads. The courtyard covers a substantial 111sq m (1,195sq ft) – big enough to accommodate a three-bedroom semi-detached house.

Instead of requiring guttering and downpipes, the property’s sloping roof and corner gargoyles funnel rainwater into the centre of this open space, making a feature of a regular part of Irish weather. When it pours the rain cascades down.

The rooms of the house, which extends to 232sq m (2,497sq ft), are all open plan, every room opening to the external space via floor-to-ceiling sliding doors.

The livingroom, with honey-coloured timber boards and an open fire, is to the left of the entrance hall; the kitchen leads through to the dining area. The house has four bedrooms; the master bedroom is across the atrium from the other three doubles.

The house winds around the sloping site, beyond the stable courtyard where Schürmann had his bronze-casting foundry, so that, although it appears all to be on one level, it in fact winds down to Froemel’s studio, accessed from the courtyard, and to a self-contained one-bedroom apartment of about 83sq m (893sq ft), all set within the overall house.

Built in 1964, the property was sold in 2006. Although it was listed as a protected structure, changes were then made to upgrade the kitchens and bathrooms. Permission to retain these alterations was granted in 2009.