How much would you pay to spend a night in Trump's childhood home?

US president’s first home in Queens, NY is for rent at over €600 a night but it’s far from five star 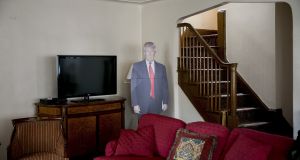 The livingroom of Trump’s childhood home 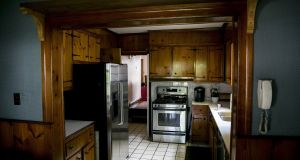 The kitchen of Trump’s childhood home 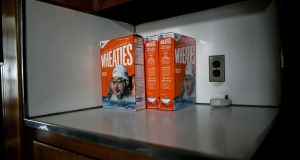 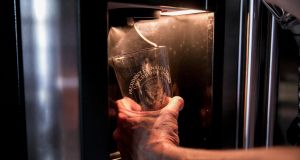 Water but no ice in the fridge at Trump’s childhood home in Queens, NY 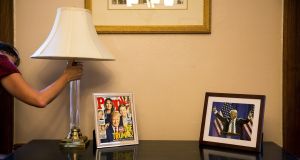 By the dawn’s early light, I searched the kitchen of Donald Trump’s childhood home in Queens for a coffee mug.

There were none to be found, so I drank my coffee from a President Donald J Trump Childhood Home insignia water glass and fixed myself a bowl of Wheaties from one of the five boxes on the counter.

It had been a restless night. I had fallen asleep in the bedroom where, according to a plaque on the wall, “President Donald J. Trump was likely conceived.” I awoke Sunday in the darkness feeling as if I’d been chasing a ghost.

New York City practically abounds in presidential dwellings. There’s the Theodore Roosevelt Birthplace in Manhattan, where young Teedie’s red velvet reading chair is on display. There are several unremarkable apartments where Barack Obama lived as a Columbia University undergraduate. There is the town house on Lexington Avenue where Vice President Chester A. Arthur was sworn in as the 21st president, which is now home to an Indian grocery store.

But there is only one that you can rent by the night, if you have $815 to spare. The two-story mock-Tudor house in the verdant precincts of Jamaica Estates that the president’s father built, and where young Donald lived until age 4, is now available on Airbnb. The host and owner have no connection to the Trump empire.

“Not much has been changed since the Trumps lived here,” the listing promises. But the Trumps left the house on Wareham Place in 1950, and between later owners’ renovations and the off-the-shelf Trump memorabilia the hosts have crammed into the place, the essence of little Donny Trump is difficult to detect.

As I entered the access code and pushed open the door Saturday afternoon, I felt a silence envelop me. There was a living room decorated with red-and-gold, Ethan-Allen-ish chairs and couches and a chaise longue meant to invoke a degree of midcentury splendor. Behind it was a dining room table with a large American flag folded across it. (Displaying the American flag on a dining table violates several provisions of the federal law known as the US Flag Code, said Michael Buss, a flag expert and deputy director at the American Legion.)

And from practically every surface gazed the visage of the adult Donald Trump. Photos of Trump, the swinging ‘80s developer; a framed People magazine cover that says “At Home With the Trumps!”; multiple paperback copies of “Art of the Deal”; a Warhol-inspired print of cartoon-colored Donalds; and, next to the flat-screen TV, a life-size cardboard cutout of the man.

As my wife and 12-year-old daughter explored the first floor, occasionally emitting startled yelps, I went upstairs to what another plaque said was “likely the childhood bedroom President Donald J. Trump.” On the wall was a photo of Trump with Michael Jackson.

I sat down and closed my eyes and tried to imagine young Donald, “a beautiful little boy, very blond and buttery,” as his preschool teacher would remember him, taking his first steps, tagging after his older siblings, stealing his younger brother’s blocks.

The house, while solid, is a modest affair, especially by Trump standards, with normal-size rooms and a tiny front yard. Fred C Trump built it in 1940 for his wife and their first two children. It had four bedrooms, possibly only three originally. By the time Donald, child No. 4, was born in 1946, things were getting crowded, and after the youngest Trump, Robert, was born in 1948, Fred Trump, now very wealthy, bought two lots behind his backyard and built a colonnaded 23-room brick mansion where Donald spent the rest of his childhood.

In the small backyard, I looked over the fence at the mansion. I pictured Donny as a teenager looking from the mansion’s yard back at the house where he used to live and thinking, with a mix of wistfulness and contempt, “That’s where I came from, and look where I live now.” As made-up insights go, it would have to do.

The doorbell rang. It was a man who grew up in the house in the 1980s and 1990s. I had invited him over to walk through it. The man, who asked not to be named, citing concern for his family’s privacy, pointed out the renovations his father had done, including one of the house’s few seemingly Trump-like features, a Jacuzzi with gold trim. He seemed both amused and chagrined to see his childhood home turned into a makeshift shrine.

Fred Trump lived in the mansion until his death in 1999, and I asked the man if he had met him. Not directly, he said, “but I came home from high school one day and there was some sort of a subpoena for Fred Trump taped to the door.” The experience may have influenced him: He is now a corporate lawyer.

Living in the shadow of greatness, or at least prominence, can be inspiring. Christopher Sweatt, a piano teacher, rented the two-bedroom apartment with an uneven floor and a temperamental toilet on West 109th Street that was briefly home to Barack Obama, from 2014 until a few weeks ago.

“It made me want to make the most of the time that I had there and work hard and put my energy to good use,” Sweatt, 28, said last week. “Just knowing at the time that he lived there that he probably had no idea what really he was going to go on to accomplish in his life — maybe super cool things can happen to anybody.”

A few cool things happened even during Sweatt’s tenancy, he said. “’Do you want to go back to Obama’s?’ is probably the greatest pickup line of all time.”

The man behind the Trump Airbnb is a developer named Michael Davis who bought the house in 2016 after the election for just under $1.4 million, flipped it for $2.14 million, and is now leasing it from the anonymous current owner for $4,000 a month. At $725 per night (the base price), he may make a profit if he rents it at least six nights a month. He has been doing a brisk business with journalists, including not only me, but reporters from Newsweek and the New York Post.

As $725 Airbnb rentals go, the place is still a bit shy of five stars. Two of the toilets run unless you jiggle the handles. The refrigerator dispenses no ice. More troublingly, there was no gas, which meant no hot water or stove (the host, an associate of Davis’, had apologized for the inconvenience the day of the rental). So for dinner, we got takeout Indian food and moved the American flag off the table and ate spinach paneer and garlic naan. I thought of Donald Trump’s formidably formal father, who wore a jacket and tie to family dinners every night. I could not bring myself to sit at the head of the table.

After dinner, I turned on Fox News. A Republican congressman was talking about the person who for four years had occupied the same piece of real estate where I was sprawled on a couch. “He’s going to keep racking up big wins,” the congressman said.

In the morning, after breakfast, I washed the presidential glasses and the Wheaties bowl. I jiggled the handles on the toilets one more time, helped my family gather our belongings, and said goodbye to the cardboard cutout by the TV.

Eileen Flynn: ‘As a Traveller woman, I was undermined in the maternity hospital’
2