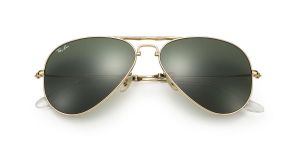 By 1936 the prototype was ready, looking much like the Aviator today – a delicate lightweight frame encasing large teardrop-shaped green lenses.

Probably the most recognisable sunglasses on the market – even after nearly 80 years – the Aviators weren’t even called that in the beginning, though they should have been as they were designed for test pilots.

These brave men tasked in the early years of the 20th century with seeing how high and far the newly designed aircraft could take them wore goggles encased in fur-lined leather hoods. But taking even this limited protection off at altitude risked serious eye injury. That’s what decorated US flier John McCready saw in 1929 when his friend Shorty Shroeder, momentary took his goggles off to try to deal with glare and suffered serious eye damage.

McCready commissioned the progressive New York optical firm of Bausch & Lomb, which had been established in 1853, to design eyewear capable of filtering out the dazzling brightness of high altitudes.

By 1936 the prototype was ready, looking much like Aviator’s do today – a delicate lightweight frame encasing large teardrop-shaped green lenses.

It was a classic marriage of form following function – with the large lenses enabling those first pilots to look down at their controls without taking off their glasses. In 1938, the frame – which was originally plastic – had been changed to metal and they were patented with the literal name of Ray-Ban Aviator. By the late 1930s, they were marketed to sportspeople as a premium product and one with Bausch & Lomb’s “scientific glare protection”.

The company created the Ray-Ban Shooter with green or yellow lenses – the yellow lenses were said to minimise haze; and the Ray-Ban Outdoorsman offered the option of classic Aviators but with a leather covering on the top bar and the tips of the arms of the glasses.

But it is the classic Aviators that captured the imagination: being linked with pilots gave the design a glamorous allure from the very beginning, one that shows no sign of getting old. The frames are a favourite of Hollywood actors including Tom Cruise and Jennifer Aniston.