Mirrors, paintings, some rare silver and a fireplace salvaged from Merrion Square 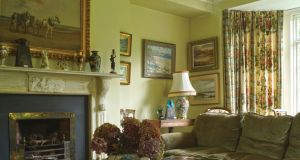 The first big house clearance auction of the new season gets under way next Saturday (August 26th) when viewing begins at “Lota”, Brighton Rd, Foxrock, Co Dublin. Sheppard’s is conducting the sale on behalf of the executors of the estate of the late Patricia Moore who died, aged 95, in June. The house itself is to be sold by Sherry Fitzgerald

Three days of viewing will take place on the premises at “Lota” and then the auction itself will take place in the saleroom in Durrow, Co Laois, on Tuesday (August 29th). Sheppard’s said Mrs Moore had been pre-deceased by her husband Dermot Moore who died in March this year, also aged 95, and that he was “a builder and hotelier who built houses in Malahide, Goatstown and Rathfarnham; and, was very involved in both the Aghadoe Heights Hotel, Killarney, and the Boyne Valley Hotel, Drogheda; and, was a founding director of Flogas, Drogheda”.

Almost 500 lots of antique furniture, art, silver, light-fittings, mirrors, china, glass and various collectibles will go under the hammer. Some of the items were originally in Dardistown Castle, near Julianstown, Co Meath.

Lot 231, estimated at €800-€1,200, is a Regency period mahogany and satinwood inlaid spinet (square piano) made by Astor & Horwood, London, and retailed by Paul Alday, a French-born composer who moved to Ireland in 1804 and ran a music shop in Dame Street, Dublin.

The most unusual item is Lot 82, described as a “correction chair” – made for children to correct bad posture and also used in nurseries as a form of punishment. The Irish-made 19th-century chair has an estimate of €150-€250.