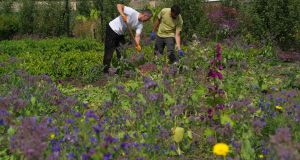 It’s always fascinating to note the events in our lives that help to shape and define us as gardeners. In the case of Brian Quinn, the horticulturist who is part of the small team of OPW gardeners in charge of Ashtown, the wonderful 2.5 acre Victorian walled garden adjacent to the Phoenix Park Visitor’s Centre, his “eureka” moment happened one October day back in 2011 when two hives of honeybees arrived to take up residence in the garden’s swish, new timber-and-glass apiary.

“Everything changed for me the day the bees came to the walled garden. I started to see things very differently, to look at things through their eyes. In particular, I started studying the kinds of plants and habitats that the bees liked to visit as well as the ones they didn’t and wondering how we as gardeners could help.”

And so began a process that saw Brian and the other two OPW horticulturists in charge of Ashtown, Meeda Downey and Paul Whyte, fine-tuning their style of gardening to be as pollinator-friendly as possible, which culminated in the walled garden being awarded a prestigious All-Ireland Pollinator Award by Biodiversity Ireland just last month.

Gone, for example, are the varieties of decorative double dahlias whose flowers once filled the garden’s side panels, replaced by single-flowering/collarette varieties such as Moonfire, Happy Flame, Pooh and Twyning’s After Eight that allow hungry pollinating insects much easier access to their nectaries and are more pollen-productive.

Also gone are the neat, weed-free expanses of bare soil once found beneath the walled garden’s double avenue of apple trees. Now the ground is covered with a pretty, weed-suppressant ribbon of fragrant oregano, the sun-loving perennial herb whose magenta-coloured flowers are loved by most pollinating insects, especially moths and butterflies.

Similarly, where the bare soil around the walled garden’s pumpkin plants was once kept impeccably weed-free through regular, diligent, time-consuming hoeing, it’s now covered with a carpet of Phacelia tanecetifolia. This easy-to-grow hardy annual serves a number of purposes, not only suppressing weeds and protecting/enriching the soil as a green manure, but also providing an abundance of nectar and pollen throughout the summer/early autumn months via its powder-blue flowers.

Their pollinator-friendly spring blossom aside, the abundance of delicious fruit produced by Ashtown walled garden’s plum, pear and apple trees also plays a useful pollinator-friendly role. “We leave some of the overripe, wind-fallen fruit to rot on the ground for certain species of butterflies to feed on it.”

Hordes of happy pollinating insects can also be found contentedly feasting on the garden’s annual pictorial meadow which the OPW gardeners sow each year in late spring/early summer, using a combination of seed mixes sourced from Moles Seeds. Filled with a fast-growing blend of cornflowers, annual mallow, cosmos, marigolds, sunflowers, viper’s bugloss, borage and other annuals, it’s a vividly colourful feast for the eyes at this time of year.

The meadow’s spectacular, pollinator-friendly beauty aside, this remarkable walled garden in the centre of Dublin city contains numerous other examples of the many ways we can all encourage pollinators. These include its clover-rich lawns grown without the use of selective herbicides and its double herbaceous border, which contains a wide range of perennials – solidago, heleniums, eupatoriums, hollyhocks, sedums, asters, aquilegias, lythrums, salvias, knautias, agastache, astrantias, pulmonarias, and dicentras – chosen to provide food for pollinators throughout the seasons.

Ashtown’s large vegetable beds are also thoughtfully managed in pollinator-friendly ways that encourage optimum plant health – careful crop rotation, netting against common pests such as carrot fly and cabbage butterflies, the use of disease-resistant varieties – thus minimising the need for pest and disease control. On the rare occasions that they decide the latter is required, the OPW gardeners use only organically acceptable methods but only as a last resort and always with great care. An example is pyrethrum, an organically acceptable pesticide that Brian uses to control the pest known as pear sawfly. While approved for organic use, it can harm beneficial pollinating insects if used indiscriminately, so Brian makes sure to apply it as a carefully targeted spray in very early morning when bees, butterflies and other welcome insects aren’t yet on the wing.

Similarly the gardeners ensure that the fresh seed sourced each year to propagate much of the walled garden’s wonderful range of flowers and produce hasn’t been treated with neonicotinoids (systemic insecticides that translocate into the plant’s tissue and are harmful to bees and other pollinators). They’ve also made room in this carefully tended historic garden for pollinator-friendly weeds – clover, charlock, nettles, valerian, wild grasses – as well as leaving small, quiet corners undisturbed to encourage different species of solitary bees.

“We recently discovered a rare, solitary species known as the red mason bee nesting in tiny gaps in the garden walls,” says Brian proudly. Believed to be up to 200 times more efficient as a pollinator than the honey bee, the red mason bee can dramatically increase yields of fruit and vegetables in gardens and allotments, proving that pollinator-friendly gardening isn’t just great for the planet but also for all of us who prize healthy, tasty, homegrown food.

Potato crops still in the ground at this time of year can become vulnerable to slug attack, dramatically reducing quality/yields, so if they’re ready to harvest then it’s best to lift them. Either use them or store them in a cool, dark, dry shed, bearing in mind that early varieties will not store well for long. Traditional precautions such as setting slug traps, using organically acceptable slug bait and hand collecting aren’t effective when it comes to soil-dwelling species of slugs, making it difficult to minimise damage.

Late flowering species/varieties of clematis really come into their own at this time of year, adding valuable colour and seasonal interest. While the ideal time to plant them is in spring, plants bought in garden centres can sometimes be accidentally mislabelled leading to annoying colour clashes being discovered long after planting. That’s why it’s a good idea to purchase plants in flower so you know exactly what you’re getting.

Species/varieties that bloom at this time of year include the purple-flowering Clematis viticella Polish Spirit and Etoile Violette, and the yellow-flowering Clematis tangutica Bill McKenzie, all of which are excellent grown against/on a wall or pergola, while the non-climbing, sub-shrubby Clematis heracleifolia is great for a sunny border.

Dahlias are in full flower now and will continue to bloom prolifically until the first frosts but only if kept regularly deadheaded. Use a sharp secateurs or scissors to do this, making sure to cut back to the next emerging flower bod rather than leaving ugly lengths of deadheaded stems to disfigure the plant. Dahlias are also vulnerable to being damaged by strong winds and heavy rain at this time of year as the plants become tall and heavy with growth, so it’s important to stake them securely using stakes/canes and garden twine.

Róisín Ingle: Five ways to find joy in a pandemic. Only one of them is illegal
5