Historic Cork fort to be converted for tourism 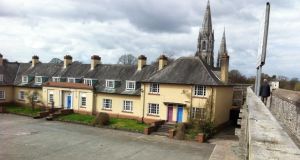 Elizabeth Fort cottages: are being conserved and restored to be let on a short-term, holiday basis

Fancy taking a vacation at a historic 17th-century fort that was shelled during the Williamite Siege of Cork? Well soon you can thanks to the work of the Irish Landmark Trust. Irish Landmark, a charitable organisation that leases out a number of restored properties in unusual locations, is hoping to raise €100,000 from local businesses in Cork to complete the renovation of two cottages inside the striking ramparts of Elizabeth Fort overlooking Cork city centre.

The star-shaped fort, built in 1601 to defend the city, was the scene of one of the most decisive episodes in Cork’ s history when Williamite forces shelled the fortress in 1690 and the Jacobite garrison within surrendered and Cork fell.

Irish Landmark Trust chief executive Mary O’Brien says the fortress, on Barrack Street, played many roles over the subsequent centuries including that of a military barracks, a women’s prison and more recently a Garda barracks.

Recently it has been opened to the public following the restoration of the historic ramparts and local historical interest groups have called for the permanent development of the site for tourism.

The Office of Public Works handed over control of the site to Cork City Council in 2014 and two years later the council approached the Irish Landmark Trust with a view to conserving and reusing two adjoining houses at one end of the L-shaped block which had been occupied by An Garda Síochána.

“We are seeking funding from local businesses to complete this wonderful project – €250,000 has been pledged to date. The amount needed is now at €100,000. We encourage anyone in the Cork area with an interest in heritage and culture to support this important work,” O’Brien says.

She explains that the Irish Landmark Trust, founded in 1992, works throughout the island of Ireland to save interesting and unusual heritage buildings that are at risk of being lost.

These buildings, which are of architectural, social and historic importance, are conserved and restored and are then let on a short-term, holiday basis.

O’Brien adds that as soon as a property is conserved by the trust and made ready as a holiday home, a new part-time job is created in the local community for the role of house manager who meets and greets the guests and manages the property on a day-to-day basis. The rental income in turn is used to maintain and meet the operational costs of the buildings.

Since its first restoration in 1997, the trust has completed the restoration of 32 properties at 27 sites.

“The life of each property, that may have seemed lost and gone forever, becomes present and real once again. The past re-echoes in the footsteps of the new resident,” says O’ Brien.

My marriage is boring and polite. How do I make my husband interested in me?
Real news has value SUBSCRIBE