What €680k buys in Blackrock, Terenure, Sutton and Blarney

Three of these five homes cost less than their asking prices 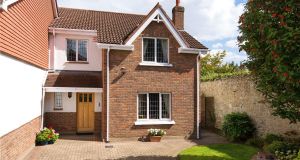 66 Hazelbrook Road, Terenure, Dublin 6W
Three-bedroom semi located at the end of a cul-de-sac and with a large walled back garden and garage to the side. Retro feel inside with many tiled fireplaces.
Asking: €625,000
Sold: €680,000
Difference: 9%
Agent: Sherry FitzGerald