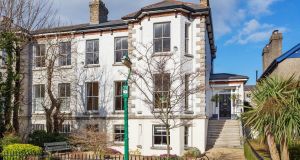 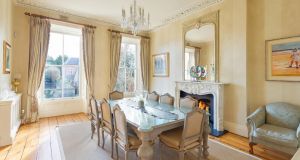 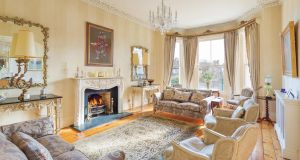 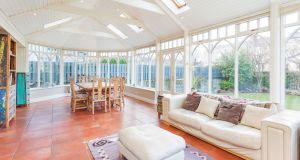 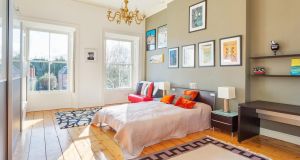 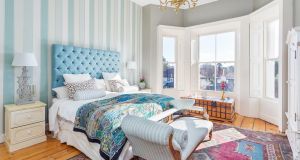 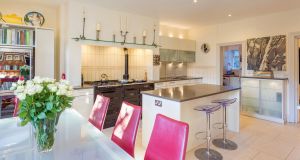 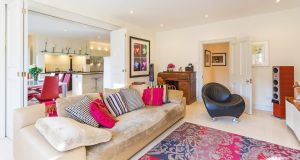 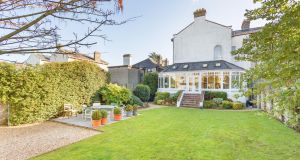 Palmerston Villas, a quiet cul-de-sac off Upper Rathmines Road and around the corner from Palmerston Park, is home to just a handful of houses as a good chunk of the road is occupied by Brookfield Tennis Club.

Developed in the mid-1860s, these spacious homes rarely come to the market, and if they do it is generally due to an empty nest as most of the period homes on the road are in excess of 350sq m.

Such is the case with number 2, which extends to 380sq m (4,088sq ft) over three floors. It is not only the space, but the location and excellent decorative order of the property that are the selling points.

The current owners, who have lived here since 2004, could easily live at garden level due to the vast space it offers, and with their children now grown up are moving on to a more suitable property.

At garden level, the couple installed a new kitchen by Robinsons in Belfast. With a giant Aga, and a plethora of Miele appliances it has all the bells and whistles to be expeced in a property of this calibre. A large living room links to the kitchen, and the installation of new bi-fold doors allows a great flow through the rooms.

Also at this level are a utility, pantry, bathroom and en-suite bedroom.

A Norman Pratt conservatory is on the return and has been used over the years as a teenagers’ den. “It’s great, even if it is filled with kids, you can’t hear anything from the other rooms,” says the owner. Such is the space here that until recently it housed a table-tennis table. The owners had the glass roof replaced with a slate counterpart so the room is utilised year round. Arched gothic doors open out on to the rear garden – where there is off-street parking.

On the first floor the scale of the rooms becomes evident. Off an imposing hallway is a study and two elegant reception rooms. The owners engaged interior designer Suzanne Garuda – who also created interiors for the Kremlin in Moscow and the Sultan of Brunei’s palace – to give these rooms the grandeur they deserve.

Of curiosity are the original pelmets which were discovered under a faux ceiling when the house was in bedsits. These acted as a theme for the interiors, which besides the vast ceiling heights and intricate plasterwork, includes hand-painted striped walls.

On the upper floor are three large bedrooms, the principal is very bright thanks to three bay windows, and all rooms are en-suite.

The property in turnkey condition, is wired for Cat6, has hubs on each floor for broadband and wireless music and is on the market through Sherry FitzGerald seeking €2.75 million. Number 4 sold in 2014 for €2.5million.