Second phase rolls out in Kinsale with new prices 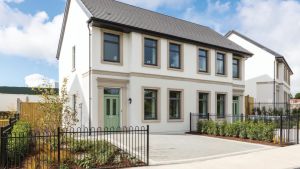 To catch the last of the summer visitors Gannon Homes launched Kinsale Manor, a new development of 136 three- and four-bed new homes in the gourmet capital of Ireland, at the starting point of the Wild Atlantic Way, on the last weekend of August last year.

The estate, set in the picturesque town where developer Gerry Gannon himself has a second home, attracted 500 people that first weekend and in two to three weeks its first 36 properties had been sold.

Gannon originally bought the 17.5 acre site in 2008 with planning for 201 three-storey homes, and since then the scheme was redesigned.

Its density was reduced to 136 units, all two-storey, by Peter Heffernan of Wilson Architects.

Forty per cent of the purchasers in the first phase were first-time-buyers, another 40 per cent were trading down while the other 20 per cent were second home buyers, many of whom Paul Hannon, director of new homes at Sherry FitzGerald, believes will rent the properties in the short-term before moving down to the seaside town in the next few years.

The showhouses have been designed by Angelina Ball of Phoenix Design. One has an east coast American feel with Hamptons inspired decor, including wood panelling in soft weathered pastels. The other offers a more contemporary interior with uncluttered clean lines. The houses include kitchens by Stylecraft, based in Ballincollig, uPVC windows by Grady Joinery and parking for up to two cars.

Two-bed cottage in Terenure Village for sale for €495,000
Real news has value SUBSCRIBE