Priced out of Killiney? Nearby Ballybrack is a good value alternative 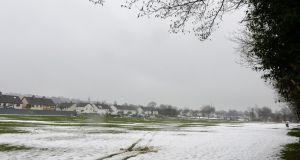 A view of a park in Ballybrack, Co Dublin, during the recent snow. Photograph: Dara Mac Dónaill

The “Beast from the East” was melting into the pavements and front gardens of Ballybrack – consigned to memories and history – when we visited the place where former taoiseach Seán Lemass was born in July 1899. He was born in a small cottage his parents were renting in an area like so many others – small villages strung out in the rural hinterland of the capital.

That rural nature began to change in the 1950s as a mix of both private and social housing was constructed, with the most desirable estates in the area, such as Oakton Park built in the 1950s, Ralahine built in the 1960s, and the Watson estate built in the 1970s, all located in the northern end of the village.

The southern end of Ballybrack, including the Sheelin estate and Inagh Court, was traditionally the less expensive area of the town.

The exact borders of Ballybrack and Killiney are a little unclear, with one view being that Ballybrack is located to the south and southwest of Killiney Hill, with the two areas merging at the aforementioned Watson Estate and Ralahine. The eastern border then runs along both Church Road and Shanganagh Road, which is defined as being Ballybrack to the west side of both and Killiney on the east side. However, this definition is subject to debate, with, for instance, the large Watson estate often claimed as Killiney, Glenageary or even Cabinteely.

On the east side of the village, Military Road and the roads leading off it, despite being part of Ballybrack village and having the local post office located on it, are seen by many to be Killiney. Similarly, on the northeastern border up Church Road those houses on the west are considered Ballybrack and to the east Killiney.

What Ballybrack does as a whole – both north and south – is offers good value in one of the most desirable segments of south Dublin. With Killiney to the northeast, Shankill to the south, and Cherrywood, Loughlinstown and Cabinteely to the west, Ballybrack has the amenities of some of the best areas in Co Dublin but without the price tag to match.

Most of the buyers in the area are young professionals planning or just having started a family, and who have become aware of the value available. This younger demographic is combined with a large number of families that set up a family home here 30 or 40 years ago and have never left.

The majority of buyers are Irish, with a small population of non-nationals and new-Irish. A number of Mediterranean natives have bought in the town, and there is a small Chinese community. A small number of Indian investors have also bought.

The crossroads of Military Road, Shanganagh Road, Wyattville Road and Church Road forms Ballybrack village, and with it the centre of life in the town. There are two pubs: The Igo Inn and the Ramblers Rest, with the Igo doing a decent pub-grub menu. Then down all of the main roads except Shanagangh there are the other usual suspects in terms of small-town facilities. The new Insomnia coffee shop has become a focal point with a brisk trade all day, but there is a distinct lack of evening eating options mainly due to the fact that Killiney and Cabinteely offer such good alternatives nearby.

Quando Pizzeria is the exception to the rule. Located on Church Road, with a big glass-fronted façade and a minimal interior with white-tiled walls and a go-faster red stripe running through them, this little pizzeria is a hidden gem of south Dublin.

The owner and head chef comes “from Bucharest, but grew up in northern Italy”, where he “learnt to make thin-crust traditional Italian pizza”, he told us. And how: superb bases, fresh and imaginative toppings and decent coffee and desserts to follow. This place is a beaut.

Similar outlets opening in the town in the future would be a huge boost for the area, with the empty period building that was formerly JB Murphy & Son corner shop, also on Church Road, offering a potentially excellent renovation opportunity for an aspiring catering entrepreneur.

“The majority of homes in the Ballybrack area are three-beds, but often with garages and large gardens and potential to expand,” says Lorraine Maher, DNG Dún Laoghaire associate director.

Four-beds are also available, but less in number, while there is just one apartment block, Ridge Hall – a Celtic Tiger build that brought very high-spec homes to the market, with views out to the south over the Dublin Mountains. Prices start at €319,950, which is the asking price for a three-bed, two-bath duplex apartment at Ridge Hall.

At the top end of what is currently available, €369,000 starts bidding on a three-bed, semi-detached at 69 Ralahine.

Any new developments coming to the market?
Space in Ballybrack is at a premium, with very little new land available for development. There are “some infill-site developments taking place in patches throughout the town, but they are small in number”, says Ben Thompson, Churches Estate Agents sales and marketing manager.

The closest major development is the Hines project at Cherrywood, which was previously covered by this column, which will bring 8,000 units to the market in a brand new town. That town will incorporate a build of commercial units and recreational facilities that will directly benefit – and lead to an increase in property prices in – Ballybrack. Hines says Cherrywood will be built by 2021.

Getting there and getting around
Connectivity is one of Ballybrack’s strongest suits. The Dart line running through nearby Killiney is about a 15-minute walk away, and brings one north to the city centre and also connects Ballybrack to the commercial hubs of Bray and Greystones.

Cherrywood Luas stop is a 20-minute walk from Ballybrack village, and connects all the Green line amenities: notably Dundrum Town Centre, Ranelagh and the city centre.

There are regularly bus routes to Dublin city, and the N11 is close by. In terms of transport, this town is sorted.

Sports and open spaces
There are three big sports clubs in the town in the form of Seapoint Rugby Club, Ballybrack FC and Foxrock-Cabinteely Ladies GAA, all of which are located in a green belt of land in the town’s most desirable northwestern end. Cabinteely Athletic Club running track is in the same green space. The original design of many of the estates also incorporates plenty of green into the town, giving a sense of space that many other Dublin towns cannot match.

Killiney Hill would be the main green walk in town, which looks out over the Irish Sea and Dublin coastline, affording the same views that the likes of Bono, The Edge, Enya, Neil Jordan and – the currently renting – Conor McGregor can take in from their homes.

Schools and colleges
St Laurence’s College in nearby Loughlinstown is a large mixed post-primary school with a strong Leaving Cert programme.

There are several girls’ schools within easy reach of Ballybrack. Holy Child on Military Road, Killiney, St Joseph of Cluny on Avondale Road, Loreto Dalkey and Rathdown in Glenageary are all within a short drive.

For boys there are fewer options, although Clonkeen College is a popular option. The Dart and Luas lines are often used to attend schools that are outside the local catchment-areas.

For sale
Renovated two-bedroom terraced house at 20 Daleview for €375,000.

How many sexual partners is ‘too many’?
9