Generation rent: ‘There’s no hope of any of us buying a house’

A group who could decide Election 2020, on their political priorities 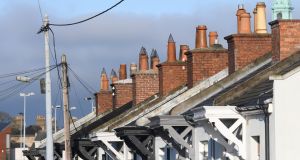 ‘We’ve been renting in Dublin since 2014, and I just don’t see an end to that,’ says Róisín. Photograph: Artur Widak/NurPhoto via Getty Images

“We are all educated. We all went to college. We moved up to Dublin. We work all the time. Yet there’s just no hope of any of us buying a house,” says 28-year-old Muireann Nagle, sitting at the kitchen table of the home she rents in south Co Dublin, with two of her housemates – all friends from Tipperary.

Housing has become one of the dominant issues the 2020 general election, and the cohort sometimes glibly referred to as “generation rent” could yet be the ones to decide its outcome. This is the demographic in their late 20s or 30s .

Typically, they have a good education and excellent career prospects. They get up early and work hard at their jobs. Their adult lives have not been blighted by recession or negative equity. If they have spent time abroad, it is usually through choice rather than economic necessity.

Yet they see little prospect of ever being able to afford to buy a home. And for some, this means they are left feeling stuck on the cusp of adulthood, unable to move forward to the next stage of life.

My friends are renting in Cork at the moment, and they are paying half of what I’m paying

“We’ve been renting in Dublin since 2014, and I just don’t see an end to that. I don’t see when we’re going to stop renting, which is kind of worrying,” says Róisín, Nagle’s housemate, and a 27-year-old primary school teacher.

They share their house with Meabh Moynihan, who is 24.

In common with around 17 per cent of the electorate in what is being called “the change election”, they were still undecided at the time of the interview on how precisely they will vote. But vote they will. And for them – like 34 per cent of voters, according the latest Irish Times/Ipsos MRBI opinion poll – housing will be the dominant issue.

The house they share costs €2,800 per month to rent, which they agree is reasonable for the area. But it still represents a significant chunk of their income.

“When you’re paying quite high rent, there’s only so much you can actually save. If nothing happens in the meantime, that would go towards buying a house eventually. But say the car breaks tomorrow, that’s the end of the savings,” says Róisín.

Nagle, who works in financial services, is similarly frustrated that she has “to spend all our money on rent and towards a house that isn’t ours and will never be ours.”

They consult with one another and realise they don’t know anyone among their wider friendship groups who is a homeowner.

Moynihan is already worried about how housing insecurity might affect her future plans. “It’s in the back of my mind: what’s my long term plan, to be here or not to be here? Do I need to like change my path a little bit, so that I could move to Cork if that’s an option? Because my friends are renting in Cork at the moment, and they are paying half of what I’m paying.”

So far, they haven’t heard anything in the manifestos of the main parties that gives them hope that they might one day own a home. They worry that Fianna Fáil’s SSIA-type scheme and Fine Gael’s €30,000 promised tax break would push up house prices. And saving for a deposit, says Muireann, is difficult.

“Unless you’re willing to do nothing, and literally everything you earn goes towards saving, and I just think for myself anyway at the moment, it’s not on.”

So the issue is not that they’re eating too many avocados? “Oh, so that’s the problem,” Róisín laughs.

She is in favour of a rent freeze, a policy proposed by Sinn Féin, Labour and Solidarity-People Before Profit. “For people who are on low or no income, how are they ever supposed to get themselves out of that situation? So it has to be a government decision or a societal one, to help these people.”

Homelessness is another issue on their minds as they decide how to vote. Moynihan passes the canal on her way to work, and “you see loads of homeless people in tents. During November and December, when it was so wet and cold, it was so heartbreaking.”

“You just wonder what’s it going to take for the problems to be sorted out,” says Róisín.

“I’ve never seen it this bad. It’s all over,” Nagle agrees.

As with other demographic groups, the government’s track record on health is something they’ve been weighing up. The cervical care crisis was “a wake-up call” for their generation, says Nagle. “You’d just kind of worry that is this, just the tip of the iceberg.”

But it’s not clear how – or even if – it might influence their vote. “I don’t know that Fianna Fail would do [a] better job. They, I mean they were in government before and the trolley crisis was there” then, says Róisín.

“It’s just a problem that passes on and passes on,” says Nagle.

They do, however, give the Fine Gael-led Government credit with rebuilding the economy. “Compared to 10 years ago, there are jobs,” says Nagle. “People aren’t being forced to emigrate for that reason. So something must have been done well.”

But, she adds, “all those people who are saying the boom is back – do you know, it’s not back for everyone. It’s not felt so much down the country.”

She’s also worried about how “all the big Googles and Facebooks are being let away with paying little tax, and then you have people in the country really struggling.” If those tech companies “pulled out of Dublin, I’d say things could change very quickly.”

“Housing and healthcare are issues that I see our government having a bigger influence on than climate.”

Nagle, too, would rather see the next government focus on the things she believes it can change. “I’d rather see homelessness dealt with . . . I know that’s just the wrong way to think and that’s why we have this issue.”

Climate change just “wouldn’t be my top priority at all on the list of reasons I’d be going out to vote”.

It is “probably one of the most important issue there is,” says Róisín. “Because it’s going to affect everybody’s lives for generations. But it’s not pressing right here, right now.”

As a teacher, Róisín has been directly affected by the issue of unequal pay scales in education. “Because I started teaching after 2011, I’m on a different pay scale to most of the teachers in my school, which means I’ll never make the money that they are on.

“It’s just unfair that you’re working, you’re doing the same hours, the same work as the people that you’re with, but they’re earning so much more money. It’s really hard to take,” she says.

And, she adds, “it’s the reason why we’ve lost so many good teachers. Most of my friends from college left Ireland.”

So given all of these considerations, will they be voting for a change of government?

The idea of change resonates with all three, even if they have not yet made up their minds what that change might look like.

“I’m more likely to want a change of government,” says Róisín. “Just some fresh blood. Don’t let things get stale. Don’t let people become complacent. There have been some brilliant things that have happened, but there have been a lot of problems as well.”

However, she’s concerned that “Fianna Fáil and Fine Gael are so similar, one of them is not likely to do what the other wouldn’t. But I’m more inclined to go for a change.”

“Part of me would like to keep them on their toes by switching them out,” agrees Moynihan.

Nagle may still give her vote to Fine Gael, “just because of what we said in terms of the job situation has improved and I’d have some sort of hope that they could keep the country moving in the right direction.” But then she adds that she reserves the right to change her mind before February 8th.

On the whole, all three are optimistic about the future, and feel happy with their choice to stay in Ireland. “Ireland is a good place to live,” says Róisín.

“Aside from all the problems,” jokes Muireann. “I do think it is a good place and it’s moving forward. It’s moving in the right direction [and becoming] a more inclusive society.”

“I don’t know where, where I’m going to pull a house from,” says Róisín. “But I feel like it’s always worked out in the past.”