‘We’re paying insane rent, then our fantasy home falls through’ 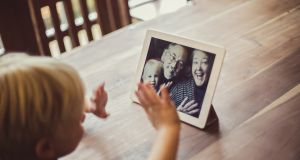 ‘It was right under our noses all along – about 300m from our rental, as the crow flies. Not only was it under budget, it was within walking distance of both sets of grandparents.’ Photograph: Getty Images

Last summer, my husband and I began paying an insane amount of money to rent a family home in a seaside village. We were incredibly lucky to be selected from the queue of prospective tenants vying for the lease – without it, we couldn’t get our oldest child into the local school. But it meant we were haemorrhaging a wake-up-in-a-sweat amount of money every month. Mortgage repayments on a slightly smaller property in the area would be nearly €600 cheaper a month. We needed to buy, and fast. The only problem? Finding a house.

At first the search was enjoyable, and even briefly thrilling when we put a bid in on a “once in a lifetime” house. However after a wake-up call in the form of a medical scare with one of our children, we realised a home with glass bannisters, no garden and music blaring from the pub next door was not meant for us.

The pressure was still on to find a permanent base, but anything close to schools was inevitably too small, or madly expensive. And houses with more space were too far from transport links. Or needed a lot of work. And we had ruled out all fixer-uppers because we wouldn’t be able to afford a renovation after paying the deposit. A wise family member diagnosed us with “short blanket syndrome”, where either your feet or your shoulders are always cold. “It will never be perfect,” he counselled. “You’ve just got to jump.” Still we dithered.

And then, as the winter closed in, we had four dashes to Temple Street A&E, some serious (one of our children has a nut allergy), some less so. It would have been a nightmare had my parents not been staying with us while they waited on the keys of their new property. They had come to visit us last July, fallen in love with the village, driven straight back to the midlands and sold their home of 40 years, and had now gone “sale agreed” on a smaller but perfectly formed house round the corner from us.

There were a million little ways in which having them with us made that phase of seemingly interminable sickness not only endurable but a very special time. Instead of having to drag our youngest out into the black, icy mornings for the school run when he had severe croup, for example, he was able to stay snuggled up on the sofa with his grandparents and his beloved seasonal Aldi brochure, planning his dream Christmas feast. There is no cosier scene imaginable. And on days when my parents were away, my husband’s family were only too happy to help. Aha, so this was the village that people always talked about – the one needed to raise a child.

And then something came back to me: a house had been for sale, months earlier, on the same street as my parent’s new home

It was then I remembered what the local estate agent had said as she handed over the keys to our rental, about her mother moving on to her street. The agent’s children had called Granny’s house “the west wing” and were forever popping in and out. The agent said it was the happiest 10 years of their lives.

And then something came back to me: a house had been for sale, months earlier, on the same street as my parent’s new home. We had discounted it because it was too expensive but the market had softened since then – if it was still for sale, maybe we could negotiate a better price. We went on a little reconnaissance mission to check it out and as we returned home, we fell into conversation with a lovely woman walking a dog past our front garden. It wasn’t her dog, she said. It was her daughter’s.

The woman had moved to be close to her daughter who had health problems – hence not being able to walk the dog. Both of their husbands had since died, but they had each other. She missed her son-in-law, the woman told us, he was very nice. “And he used to fix my car. I miss that too,” she smiled.

It was a sign. I rang the estate agent: yes, the house was still on the market; no, there weren’t any offers. A few days later we had a viewing – it wasn’t perfect, but from the upstairs windows you could glimpse my parents’ new home, the west wing. But then the agent dropped a bombshell – there actually was an offer on the house, had been for several weeks, apparently. We couldn’t match the offer, let alone beat it. The fantasy was over.

Later that day I announced I was going out for a drive, by myself, and I might be some time. My plan? To open my mind, and take a second look at every property we’d previously written off. When I returned from my mission, I declared to everyone, “I’ve found our new house.”

It was right under our noses all along – about 300m from our rental, as the crow flies. A family home with plenty of space, next to a nice enclosed green with goals and a sign prohibiting golfing. Not only was it under budget, it was within walking distance of both sets of grandparents. Why hadn’t we given it a chance before? It was a fixer upper.

We began negotiating, and by the end of November the owners accepted an offer a little under the asking price. This saving would go towards covering our renovation. We asked a local builder to take a look – his quote was daunting but just about – at a very tight squeeze – doable.

As he was leaving, the builder mentioned he had gone to America for years but now lived in his childhood home down the road. And it turns out his parents live beside him. Of course they do, I thought.

Samantha Power: I called Hillary Clinton a monster, but I didn’t mean it
2

We’ve discovered our bathroom has no foundations. What should we do?
7

Vol-au-vents are back: puff pastry towers get a timely, tasty makeover
9