Cabinteely homes near the village from €535k 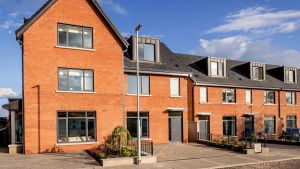 Hidden behind hoarding off the N11, just beyond the turning for Cabinteely village, is Beechpark, a good looking estate of three- and four-bedroom, three-storey, terraced and semi-detached houses that have fashionable grey-coloured windows and tumbled redbrick facades that make them look as if they’ve been there for years.

The A2-rated homes built by the O’Flynn Group have ceiling heights of over 2.6m at hall level where there is also toasty underfloor heating using an air source heat pump system.

When complete, Beechpark will comprise 83 houses and 142 apartments with 25 being launched on Saturday, February 1st by agents Sherry FitzGerald.

The three-storey layout is smart and light-filled to a design by John Fleming Architects and includes a separate reception room to the front and kitchen-diner to the back with the offer of an under-the-stairs storage system that includes deep drawers and cloakroom hanging space as an optional extra.

The entry level units are good-sized three-bedroom terraced properties, 131sq m/1,410sq ft. Asking from €535,000 these represent the best value in the scheme, have a smartly laid out U-shaped kitchen that bisects the room that opens out to the garden, with unhoned, terrazzo-like stone countertops, metro tiled splashbacks and larger than standard units that have a pared back Shaker-style doors.

Visually it feels very uncluttered. The doors and drawers are soft-closing and these homes come with a separate and vented utility room, where there is space to hide drying laundry on a clotheshorse out of sight.

The stairs leading up to the first floor are quite steep and clad in a Roger Oates-like runner, part of the showhouse look by House & Garden Furnishings.

There are two large doubles here, a roomy landing and the family bathroom where the shower is within the bath.

The master bedroom is on the second floor and has a dormer window that for now frames views of the pine-clad Three Rock Mountain. The master en suite has a black Crittal-like shower stall and smart black hardware and slate-look shower base by Sonas Bathrooms. There is also under eaves storage.

There is also a slightly smaller style, 158sq m/1,700sq ft that is being sold off plans and has great ground floor space, with thee bedrooms on the first floor and master bed on the top. Prices for this model start from €730,000.

In time there will be a road connecting the estate with Laughanstown, on the Luas green line, once the bridge accessing it is built.

The bus connectivity is already excellent. It’s about a two-minute walk to the nearest bus stop where the journey time to O’Connell Street aboard the cross-town 155, which traverses the city all the way to Ikea, is an impressive 50 minutes. The stop is also serviced by the number 145, which takes you to Heuston Station, and the number 84 and 84a, whose routes are from Newcastle to Blackrock village.