Election 2020 fact check: How many people are homeless in Northern Ireland?

Is Leo Varadkar accurate when he says 20,000 people are homeless in the North? 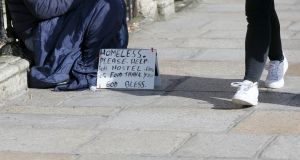 Official figures in the Republic show there were 9,713 people in emergency accommodation last month, while 12,512 households met the statutory test for homelessness in the North in 2018-19. But experts say the data is not directly comparable. Photograph: Laura Hutton/The Irish Times

“There are 20,000 people homeless in Northern Ireland”.

Who made the claim?

It came from the Taoiseach Leo Varadkar during the leaders’ debate on RTÉ’s Prime Time on Tuesday night. He challenged Sinn Féin president Mary Lou McDonald on her party’s record in government in the North.

He said that according to “the official stats” from the North, “there are 20,000 people homeless in Northern Ireland”. He added that this figure was “more than is the case here in this state”.

“I’m sure somebody will fact check that figure and find that it’s wrong,” Ms McDonald responded.

What are the figures?

According to the Northern Ireland Housing Statistics bulletin for 2018-19, which was published by the North’s Department of Communities in December 2019, 18,202 households presented as homeless in 2018-19.

Of that figure, approximately two-thirds, or 12,512 households, met the statutory test for homelessness and were accepted as “full duty applicants” – in other words, they were legally regarded as homeless.

As of March 2019, there were 37,859 applicants on the social housing waiting list in Northern Ireland. Of these applicants, 26,387 were in “housing stress”.

In the second two quarters of last year (April-September 2019), 8,750 households presented as homeless, according to the Northern Ireland Housing Executive (NIHE). Of these, 5,827 were accepted.

A report by the Northern Ireland Audit Office (NIAO) on Homelessness in Northern Ireland, which was published in November 2017, found that since 2005-6, around 20,000 households have presented to NIHE as homeless each year. On average, about 50 per cent of these were accepted as homeless.

Figures provided by the NIHE showed that, in the financial year 2018-19, the body made 3,354 placements in temporary accommodation.

The NIHE estimated that in November 2018 there were 38 rough sleepers in Northern Ireland.

Can they be compared to the figures in the Republic of Ireland?

In a word, no. “Homelessness data from Northern Ireland and the Republic of Ireland are not directly comparable due to significant legislative differences in approach,” is how the NIHE puts it.

In Northern Ireland, social housing is allocated according to a points-based system. There are four statutory homelessness tests which a household must meet: homelessness, eligibility, priority need and intentionality.

Any household which meets these four tests will be accepted as a “full duty applicant” and will be owed a full housing duty: in other words, the NIHE has a duty to find the applicant a home. This includes “ensuring that accommodation is made available for the household as well as the provision of temporary accommodation where necessary and assistance with the protection of the household’s belongings”.

The 2017 NIAO report also points out that “many households, recorded in official statistics as homeless, are living somewhere that it is not suitable for them”.

One of the categories for homelessness is “accommodation not reasonable”, which the NIAO report noted “has consistently been the category with the highest number of statutory homeless acceptances (around 30 per cent of the total). This category has been increasing year on year since 2011,” it found.

A report entitled The Homelessness Monitor: Northern Ireland 2020, which was published last month by the UK homelessness charity Crisis, said this category was “unique to Northern Ireland”, and could involve issues of affordability, property unfitness levels, unsuitability for needs or severe overcrowding.

This, it said, “significantly contributes to the historically high recorded incidence of statutory homelessness in Northern Ireland”.

In the Republic of Ireland, official homeless statistics record only the number of people in temporary accommodation.

What are the figures in the Republic?

According to the latest figures from the Department of Housing, there were 9,731 individuals in emergency accommodation in December 2019 – a fall of 736 on the previous month.

There were 68,693 households on the waiting list for social housing as of June 24th, 2019, according to the Housing Agency.

According to the cross-border homeless charity Depaul, 90 people were recorded sleeping rough in Dublin in November 2019.

The ceo of Depaul, David Carroll, said it was “important to acknowledge that homelessness is categorised and counted differently in each region when making any comparisons.

“To date, we have not seen the dramatic increase in the number of those experiencing homelessness in Northern Ireland as we have seen in the Republic of Ireland. However, trends are starting to emerge.

“Furthermore in Northern Ireland the lack of leadership over the last three years has not helped the homeless and housing issues,” he said.

“In terms of the problems faced in both areas they are very much the same and include a lack of housing supply, rising rents and a lack of adequate health interventions for those experiencing homelessness.”

He urged that these issues should be considered when tackling homelessness in Northern Ireland “in order to avoid the crisis currently being experienced in the Republic of Ireland”.

False. While the official figures are that just under 20,000 households presented as homeless in Northern Ireland in 2018, only 12,512 met the legal requirements of homelessness and were accepted as “full duty applicants”.

It is simply not possible to compare the two systems - or sets of figures - because of the significant differences in approach, methodology and criteria.