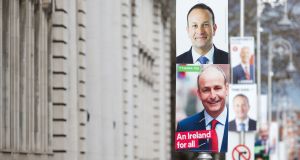 ‘The Government’s decision to allow the poll in Tipperary to go ahead raises real concerns’. Photograph: Damien Eagers/PA Wire

The Government’s decision to allow the poll in Tipperary to go ahead on Saturday, on foot of advice from the Attorney General’s office, raises real concerns about the separation of powers and the rule of law.

In proceeding in this way, the Government has chosen to act in violation of a clear law on the basis of contestable constitutional advice from its legal advisor on a matter that has not been settled by the courts.

Section 62 of the Electoral Act 1992, for better or worse, is quite clear: in the event of the death of candidate, “all acts done in connection with the election (other than the nomination of the surviving candidates) are void and that a fresh election will be held”. There is no discretion; it is a legal requirement.

Following the death on Monday of Independent candidate for Tipperary Marese Skehan, the law requires that the poll in Tipperary be postponed, new nominations allowed for several days, and the poll to take place on a later date set by the Minister.

There is a bigger problem with the Government’s actions

The AG’s office has seemingly advised that, contrary to this clear legislative provision, the poll should go ahead. The basis for this advice is that the Constitution – our highest law – states in Article 16.3 that a “general election for members of Dáil Éireann shall take place not later than thirty days after a dissolution of Dáil Éireann”.

Applying the 1992 Act, and restarting the electoral process in Tipperary, would take the Tipperary poll outside that time period. This, it is feared, could render the whole election open to challenge as a breach of Article 16.3.

The apparent advice of the Attorney General Séamus Wolfe, SC is that this means the 1992 Act rules are unconstitutional and therefore should not be followed. As such, the decision has been made to ignore the 1992 Act and have the poll on Saturday.

There are two significant problems with this. The first is that it is not clear that this reading of the Constitution is correct. The second is that our constitutional structure does not permit the Government to ignore laws because the AG thinks they may be unconstitutional.

There are good counter-arguments to the AG’s position. When the Constitution says that a “general election” must be held within 30 days, this might not necessarily mean that every poll must take place within that window.

The purpose of the provision is surely to ensure that an election for the Dáil is held in a short window after dissolution and is not excessively delayed, as this leaves the country without a functioning legislature.

Upholding the purpose of the provision would not require that every poll in every constituency is held within that window if there is a good reason to postpone it. It might be that the courts would thus be lenient in interpreting the strictness of the scope of the 30-day window.

Article 16.7 gives the Oireachtas a power to regulate the conduct of elections, subject to the Constitution. There is a reasonable argument that the 1992 Act – in dealing with the unusual circumstances of the death of a candidate – is an appropriate use of this power, and is not unconstitutional.

If the AG’s advice is treated as determinative of constitutionality, our constitutional system is upended. In our system, laws are made by the Oireachtas. When they are made, they are presumed to be constitutional and must be followed, unless and until a court rules it unconstitutional.

No one is entitled to ignore a law because they believe it to be unconstitutional. They must go to court and prove it. This is a firmly established principle, and applies to individual citizens and the State.

The Government’s core job – as the executive branch – is to faithfully execute the instructions of the legislative branch as set out in law. If the Government thinks that a law is unconstitutional, it can certainly table measures in the Oireachtas to change the law, or go to court to clarify the constitutionality of the law. But it is not entitled to ignore the law.

That would be an overreach of executive power, seizing the power of the legislature (to make and unmake the law) and the courts (to decide on constitutionality).

It would also violate a fundamental precept of the rule of law: that all organs of Government are bound by the law and must follow it.

The power that the Minister has invoked to purportedly do this – issuing a “special difficulty order” – purports to adapt or modify the statute by ministerial order. This is simply something that cannot be done. Primary legislation – Acts of the Oireachtas – cannot be changed by government order. Such powers, known as “Henry VIII clauses”, are not allowed in our separation of powers.

The Government would surely say that, in this case, they are attempting to follow a higher law in the Constitution. But what the Constitution means here is not clear, and the AG simply does not have any power to make an authoritative determination on this point.

The 1992 Act rules on the death of a candidate may be inadvisable and ill-thought through. If so, perhaps we should consider changing them. They may even be unconstitutional.

But, for the time being, they are the law, properly enacted by the Oireachtas, and they are very clear. The Attorney General is not the Supreme Court, and the Government, even acting on AG’s advice, cannot ignore the law.

David Kenny is an Assistant Professor of Law at Trinity College Dublin and co-author of the leading text on Irish constitutional law, Kelly: the Irish Constitution. Conor Casey is a Ph.D. candidate at the School of Law, Trinity

1 Could Ireland put towns under lockdown if coronavirus arrived?
2 IRFU seek meeting over call to postpone Ireland-Italy match
3 Dublin man may have been stabbed to death by woman in parking space row
4 Irish in Italy on coronavirus: ‘The city is in a bit of panic – the streets are empty’
5 Coronavirus: Irish holding back on holiday plans
Real news has value SUBSCRIBE