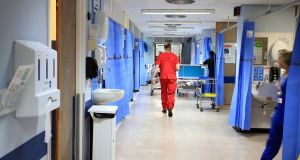 All the parties want to spend more on hospitals, but also more on primary care and GPs. And they want to cut a variety of patient charges. Photograph: PA

Health is supposed to be one of the key battlegrounds in the election campaign, but there is a large degree of unanimity in the different party manifestos on the issue.

All parties, for example, support Sláintecare as the way forward; some more explicitly than others. All parties also agree a massive expansion in funding and staffing is needed over the coming five years, notwithstanding that our health spending is already relatively high by international standards.

They want to spend more on hospitals, but also more on primary care and GPs. And they want to cut a variety of patient charges.

A number of the manifestos say they are costed, but there’s nothing that wouldn’t fit on the back of an envelope.

Here’s how the manifestos measure up on the main issues in health:

The big plan for the future

Everyone agrees the health service needs to be got back on course, and Sláintecare is seen as the road-map for this. Fine Gael is fully backing the plan, with a proposal to spend €5 billion a year extra on health by 2025.

Fianna Fáil, which barely mentions Sláintecare in its manifesto, believes an extra €2 billion a year will suffice for its proposals for the future. It wants to double spending on the National Treatment Purchase Fund to €200 million but since much of this money will be spent on private medicine, critics have questioned whether the proposal sits well with Sláintecare’s intention of taking private medicine out of the public system. Fine Gael, in contrast, is explicit in saying public-only doctor contracts will be the norm in the future.

Sinn Féin is fully onboard for Sláintecare as part of its plan to create “an Irish national health service”. It pledges to spend an additional €4.5 billion, and €1.58 billion for capital spending, “over and above what has already been committed for the period including for demographics”.

The Social Democrats, the spiritual parents of Sláintecare, promise it will “turn our healthcare system around” but they do not say how much they plan to spend on it while the Greens say they will “adequately” fund it.

Generally speaking, the parties believe extra staffing will alleviate the waiting list problem. Fianna Fáil says it will apply a four-hour target for emergency department waits, and will ensure consultants are present in emergency departments on a 24-hour basis. Anyone waiting over six months for a procedure will be able to apply for funding, it says.

People Before Profit is promising to guarantee access to healthcare within 18 weeks and to emergency department treatment within four hours.

Nobody is too clear on where these staff are going to come from.

With Sláintecare stressing the need for more services to be delivered in the community, Fianna Fáil and Aontú both say they will devote 10 per cent of health spending to primary care - about three times the current level.

The Social Democrats promise a “massive investment” in new primary care staff, and an expansion of diagnostic services

With the population rising and ageing, all parties support an expansion in services. Fianna Fáil is planning four new elective hospitals (Fine Gael will manage with three) and will spend an extra €200 million on Fair Deal.

Fine Gael says it will fund an additional one million home care hours for every year it is in office.

Sinn Féin plans to deliver an additional 12 million home help hours over the five years, and to increase the number of nursing beds by 1,250.

The Social Democrats say they will increase investment in mental health.

Nobody likes having to pay when someone is sick, and the parties know it.

Fianna Fáil (and PBP) will abolish hospital car parking charges, while Fine Gael is proposing to limit them to €10 a day.

Fine Gael wants to abolish inpatient charges for children and give medical cards to people with terminal illnesses. Labour says it will halve hospital in- and outpatient charges and will give patients on “continuous” treatment a “waiver” for parking.

Sinn Féin triumphs in the giveaway stakes with a promise to abolish prescription charges and to roll out “free prescription medicines for all”. ED and inpatients charges will also go, as will hospital car parking charges, the party says. It will also give medical cards to all cancer patients.

Free GP care - currently provided to under-6s and over 70s – has been a cornerstone of Fine Gael’s health policy in recent years. Now it says it wants to extend it to under-18s (as does Labour), and those on a carer’s grant. It also wants to introduce free dental care for under-16s, a measure that is being as vociferously opposed by dentists as free GP care has been criticised by family doctors.

Fianna Fáil says it will expand free GP care “on the basis of means” while Sinn Féin is promising “free GP care for all” over a term of government, starting with two free visits for everybody not covered by a medical or GP visit card in year one.

Fine Gael says it will introduce a no-fault vaccination compensation scheme, set up a national medicines agency and offer free contraception for women, starting with 17-25 year-olds.

Sinn Féin is promising free contraception, free sanitary products for some groups of women, free universal counselling services and three cycle of IVF for couples trying to start a family.

Labour will ensure forthcoming legislation will deal with the issue of international surrogacy; it is also promising improved access to health services for people who are transgender.

Aontú wants legislation requiring the administration of pain relief to “preborn babies” undergoing a termination, as well as a legal ban on abortion on the grounds of disability or gender.

The Greens, in their single-page health document (mental health gets another page), says children should be required to do half an hour of exercise every day, there should be more showers in workplaces and Vat should be removed from sunscreen and reproductive goods.

PBP is proposing to abolish the HSE and replace it with “democratically elected community health councils”.